Bánh Mí in The Boogie Down Bronx 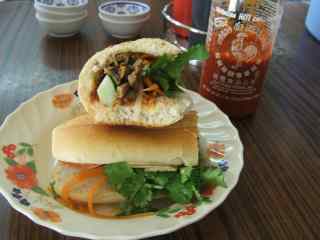 With the notable exception of Brooklyn, the Outer Boroughs are a veritable wasteland when it comes, to bánh mí, or Vietnamese sandwiches. Despite repeated forays, we've yet to find any decent versions in Queens. Those that do exist are served in restaurants, and every bánh mí fiend worth his Sriracha knows that restaurants never serve a good Vietnamese sandwich; it's simply not in their best interests to sell $3.00 entrees. As with many sandwiches, the best bánh mí are found in mom and pop delis. We like to think that these refreshing sandwiches are at their best at delis because those joints specialize in bánh mí and little else.

So when a food writer friend told us she was going to the Bronx to explore Vietnamese markets and eat bánh mí, we hastened to join her. Gothamist was shocked to learn that she had never tried the crosscultural wonder of roast pork, pâté, and any number of Vietnamese lunch meats, all dressed with pickled daikon and carrot, along with cucumber and cilantro and served on a baguette slathered with a mixture of sweet mayonnaise and hot sauce. 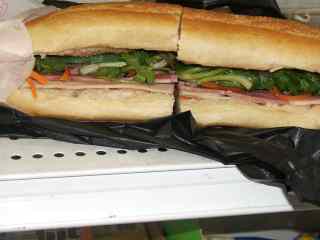 Our first stop was World of Taste Seafood Deli/Vietnamese Food on Jerome Ave. in Kingsbridge Heights. Formerly known as Phung Hung Market, this homey spot next to a West Indian restaurant and a Mexcican grocer serves up three types of bánh mí: Phung Hung, a combination of ham, ground pork, pâté and the standard dressings; Thit Heo Nuong, or grilled pork and pâté; and Xi Mai or meatball. World also has a pretty extensive menu, including some greaty looking pho. We went with the grilled pork (above). It was pretty tasty and lovingly made by an older Vietnamese lady wearing a white baseball cap that said Puerto Rico. As tasty as it was, we still prefer crispy ground pork on our Vietnamese sandwiches.

Our second stop was Saigon Hi Market Corp. in University Heights. Unlike World, this place was a full service Vietnamese market with everything from various Vietnamese soup bases to moon cakes and pomelo to celebrate the Moon Festival. Only in the Bronx can one find a grocery shelf where masa for tamales sits side by side with jackfruit chips imported from Malaysia. There's only one variety on offer here. From the photo you can see that's its more or less a ham sandwich with a Vietnamese accent, that is to say there's little or no roast pork. Aside from that one omission, it was pretty good. We use the term ham loosely here, the meats were pork bologna and headcheese.

While the bánh mí in the Boogie Down are not the city's best, they're still tasty. Next time we're in the Fordham area craving bánh mí, we'll know where to go.