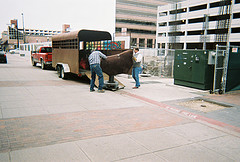 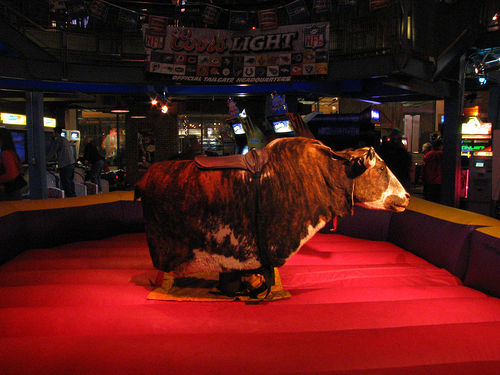 Can you believe this city has gone so long without having a mechanical bull? Robotic wildlife is finally coming to its natural habitat as a $25,000 bull is now in place for the opening of Johnny Utah's on West 51st.

NY Mag reports that the bull costs $10,000 a year to insure, which might be why their ultra-premium margaritas cost $51. While it may take a couple of those margaritas to get on the bull, we wonder if they check how sober a person is before riding.

Mechanical bulls are big on TV: On an episode of Sex and the City, Miranda rode one (but it was while the girls were visiting LA) and Ugly Betty rode some sort of mechanical bull/horse in a Medieval Times-ish establishment.

Photo of a mechanical bulls via Tom Harpel's and Buddy Stone's Flickr.