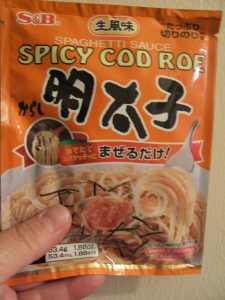 Gothamist is no stranger to the pleasures of the izakaya, which in our case usually include copious amounts of sake and yakitori. For some reason we've shied away from such dishes as spaghetti with spicy cod roe, even though we've enjoyed spicy cod roe dumplings on several occasions. Perhaps our aversion stems from the fact that such fusiony pasta dishes don't seem Japanese enough.

So when Gothamist found a package of S&B Spicy Cod Roe Spaghetti Sauce at Katagiri, a century-old market hard by the Queensborough Bridge, we had to give it a try. Like many Japanese prepared foods, it contained two envelopes. One held the dull pink cod roe sauce, chock full of tiny eggs and the other slivers of dried seaweed to be used as a topping.

Once mixed with the pasta, the sauce had a very slightly fishy odor as we expected. It proved quite to be quite good though, sort of like taramasalata with just a hint of chili. And at $3.49 for a package that makes two servings, it was a good deal, too.