At the Ethnic Market highlights international specialty foods and ingredients that you're very unlikely to find at your local Gristedes. 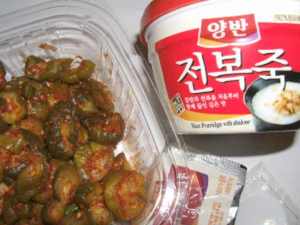 Gothamist has never been a big fan of rice porridge, whether it be Chinese congee or Korean jook. The number of bowls of congee we've eaten can be counted on the fingers of one hand. And we never had occasion to try jook until just the other day. Not that rice porridge is offensive, far from it. Rice porridge in our limited experience is a bland comfort food best suited for infants, the elderly or those suffering from a cold or flu. Which leads us to the subject of this post.

The other day while strolling around N.Y. Chonghap Market with a summer cold and an upset stomach, we found ourselves standing in front of a display filled with an array of 10-ounce tubs of premade jook. There were several flavors, including vegetable, tuna, even a sweet version with cinnamon and pine nuts. Since our stomach wasn't quite that upset, we went something a wee bit more adventurous, abalone. Fully aware that the jook wouldn't be sufficiently robust to satisfy our palate, nor ward off our illness, we headed down the aisle to the banchan case. We settled on a container filled with garlic-spiked dark green slices of kirby coated in red pepper and sesame seeds, aka oi kimchi. Surely the combination of these two Korean comfort foods would go a long way toward warding off any illness.

Upon arriving home we noticed a few things about the little tub of rice porridge. Under the lid were a tiny shovel-like white plastic spoon and two seasoning packets, one filled with seaweed and sesame seeds, and one with sesame oil. The other thing we noticed was that all the text on the container was written in Korean except for a legend on the side reading "Rice Porridge with abalone," and a nutrition facts label pasted over the top, which contained the helpful note, "CONTAINS CRUSTACEAN SHELLFISH."

Nothing on the package indicated how to cook the jook, though the small holes in the top of the lid screamed, "microwave me." Just in case, we contacted a friend who's an expert on all manner of Korean culinaria. She excitedly told us that we had purchased is known as junbok jook, and that this premade version was indeed microwavable.

After zapping it for a little over two minutes we pried the cover off to reveal a thin beige-colored soup bobbing with grains of glutinous rice, chopped carrots and tiny chunks of abalone. We added the seaweed powder and sesame oil, stirred it up and dug in to what was now a greenish colored soup with our little spoon. What sat on the table before us looked nothing at all like the picture on the package. The pieces of abalone were way smaller, not that we expected big honking disks of the stuff for $3.99. The soup itself was pretty bland except for the mild seafood flavor, the sesame oil and a touch of sweetness from the carrot. Eating the crunchy little bits of oi kimchi between sips of jook made things more interesting and provided some sinus-clearing spice.

All in all the, whole meal smacked of something that a Korean grandmother would make to comfort a sick child. With one exception, any halmoni worth her kimchi would never serve junbok jook from a can.

#chinese
#Eat on the Cheap
#elderly
#ethnic market
#food
#gothamist
#international
#rice
Do you know the scoop? Comment below or Send us a Tip
A new Gothamist is coming! We’ve moved comments over to our beta site. Click here to join the conversation and get a preview of our new website.