At La Esquina, There Will Be C.H.U.D.

La Esquina has yet another secret. The restaurant on the corner of Cleveland and Kenmare—that famously requires customers to go through a series of doors, stairs, and even its kitchen in order to get to a hidden dining room—was the scene of one of the most slightly scary horror movie sequences of all time. In a sequence toward the end of C.H.U.D. (Cannibalistic Humanoid Underground Dwellers), the camera starts with a lower Manhattan view at dusk, World Trade Center and all, drifting and finally settling over an all-night corner diner.

About a minute and a half later, two beat cops (including a slimmish, borderline handsome, waitress-harassing John Goodman) stroll in and order cheeseburgers. Meanwhile, C.H.U.D. pop the manhole covers open like Pringles cans and promptly appear in the diner’s windows, their beady low battery flashlight eyes gleaming and fangs drawn, all festooned with gooey spit. Everyone is promptly killed by C.H.U.D. 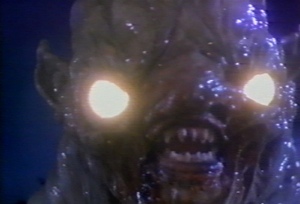 Almost 20 years later, the basement brasserie part of La Esquina opened with an ambiance evoking the Pirates of The Caribbean ride at Euro Disney, albeit one with bottle service featuring $700 Tequilas. It is unclear whether La Esquina hires C.H.U.D. for any server or mixologist positions, which is a shame because their extendo-necks and night vision are particularly suited for subterranean dining rooms. Presumably their razor sharp claws of doom are a food safety issue.

C.H.U.D., the best New York movie of all time, was filmed on location in New York City in the summer of 1983, including some vaulted brick tunnel scenes shot underneath the Manhattan side of the Brooklyn Bridge, close to where a forgotten fallout shelter was discovered in 2006. Weirdly, upon its release in 1984, the New York Times had love for C.H.U.D: Reviewer Lawrence Van Gelder wrote, “In the category of horror films it stands as a praiseworthy effort.”

#bottle service
#c.h.u.d.
#Cannibalistic Humanoid Underground Dwellers
#extendo-necks
#la esquina
#new york movies
Do you know the scoop? Comment below or Send us a Tip
A new Gothamist is coming! We’ve moved comments over to our beta site. Click here to join the conversation and get a preview of our new website.