At 5:45 on a Friday, there's already a line out the door at Astoria Seafood. "JULIO!" bellows the host, a middle-aged Greek woman with electric-blue eyeliner and a mop of curly hair. "Julio, how many you are? Get inside, now!"

The crowd outside shuffles to let Julio pass. Astoria Seafood is not a place to linger, but no one is in a hurry to get packed in like the sardines they're about to eat in the cramped, steamy space. The setup at this Greek-owned wholesale fish market-turned-restaurant is simple: Walk in. Go to the sprawling, chaotic fish counter in the back. Shield your hands in plastic bags, then pick your own seafood, straight from the display. It is recommended to wear closed-toed shoes.

There are whole pink snapper from the Caribbean, porgy from Long Island, salmon steaks, four kinds of shrimp ("No mixing shrimp!" reads a sign), and more. This is not the time to be squeamish—there will almost definitely be a crowd behind you, grabbing at the last of the scallops, and they aren't waiting for you to consider the lobster. Bring your bags to the scale up front to pay astonishingly low per-pound rates, and pick your poison: the only options are grilled or fried. (You can also get mussels and clams steamed in red or white sauce, but "I'd definitely avoid the white," declared the woman next to me. "Trust me.") 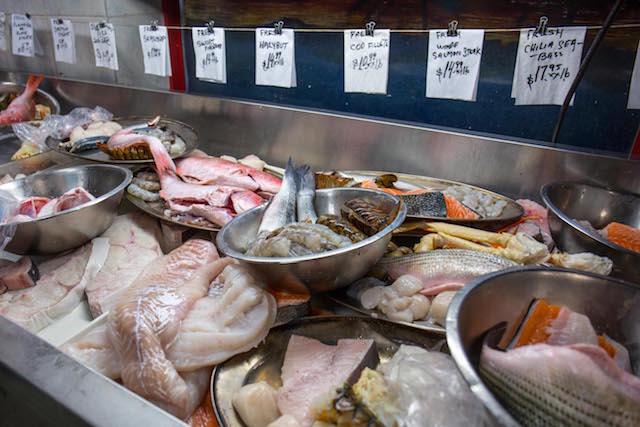 There's a separate counter with feta-drenched salads and steam-table vegetables, plus Greek standards like spanakopita and a tray of baklava for later. Point at what you want, leave your fish, then shuffle back outside until the electric-eyeliner host hollers your name. If you're lucky, you'll have enough time to run to the liquor store a few blocks down—Astoria Seafood is BYO, and, if the raucous crowds are any indication, bringing is very much encouraged.

There's a good chance you'll get to know your dining companions while you wait. The crowd here is one of the most multicultural in the city, proof that inexpensive seafood in a hot room with less-than-zero frills brings people from all walks together. Here's a sampling of the scene that Friday: a group of five women in suits, straight from the office in Midtown (they're the ones who tipped me off to the red sauce), a family of Korean tourists, an older Egyptian man who got a pound of sardines and two individual shrimp, a table of scantily-clad women apparently on their first stop of a long night hitting the town. Tinny hip-hop bleated out above us all. 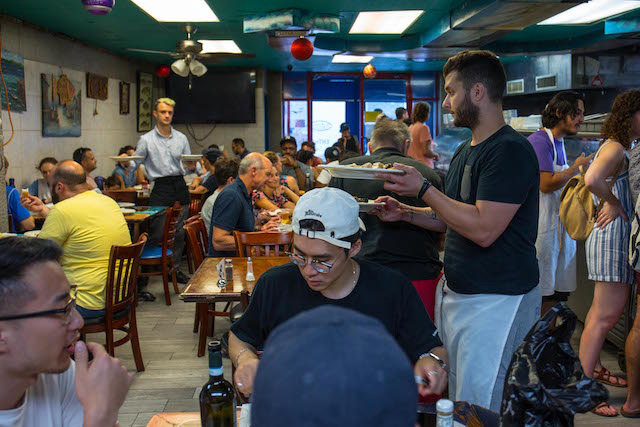 Once you're seated, the food comes fast and furious, platters dropped one on top of the other, with the occasional "Opa!" for effect. The grilled seafood is very good, expertly charred and lashed with olive oil and garlic, the fried dutifully golden and screaming hot. The steam-table sides are middling at best, though it is worth getting the lemon potatoes or garlic bread to sop up the sauce.

When a harried busser dropped one plate on the floor, the entire restaurant broke out into applause, and the host took it as an excuse to start dancing, swiveling her way around the crowded room. Approaching our table, she swept up my friend's baby, delightedly cooing and bringing him behind the counter to kiss all the cooks. When she returned, she deposited the child, showed us pictures of her grandchildren on her phone, then abruptly announced: "But hurry it up, okay? I have money to make." She laughed, and we did too: that's just the kind of place Astoria Seafood is. There were more people waiting outside, and plenty of other fish to fry. 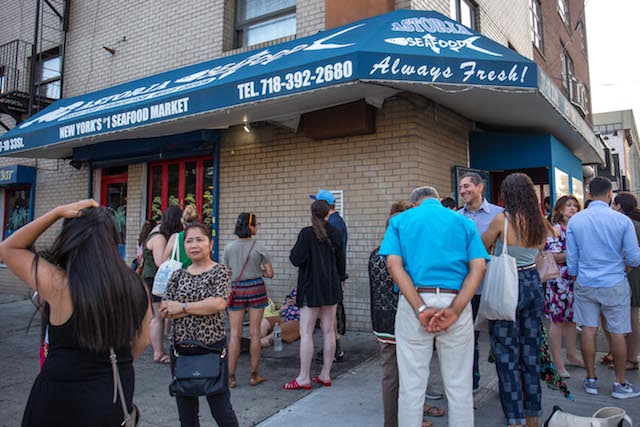 Astoria Seafood is located at 37-10 33rd Street in Long Island City. They are open 9 a.m to around 10 p.m., Tuesday through Saturday (closed Sundays and Mondays). NOTE: They are closed from August 12th to September 4th, 2019 for summer vacation.

#astoria seafood
#lic
#long island city
#queens
#restaurant
#seafood
#original
Do you know the scoop? Comment below or Send us a Tip