Ask A Native New Yorker: What's The Difference Between A Bodega, A Deli & Corner Grocer?

Are you relatively new to this bustling metropolis? Don't be shy about it, everyone was new to New York once upon a time... except, of course, those battle-hardened residents who've lived here their whole lives and Know It All. One of these lifers works among us at Gothamist—publisher Jake Dobkin grew up in Park Slope and still resides there. He is now fielding questions—ask him anything by sending an email here, but be advised that Dobkin is "not sure you guys will be able to handle my realness." We can keep you anonymous if you prefer; just let us know what neighborhood you live in.

This week's question comes from a reader who's trying to understand NYC's grocery nomenclature.

What is the difference between a bodega, a deli, and a corner grocer? Are they all different terms for the same thing? I understand that, depending on who's doing the buying, stores in different neighborhoods are going to sell different items, but my impression is that it goes beyond stock-in-trade. What do you think?

Thanks,
Curious in Crown Heights

Some natives might tell you that these are all expressions for what other Americans call "convenience stores," but this is wrong. The words we New Yorkers use to describe our metropolis are freighted with subtle meaning and reflect our city's long and ethnically diverse history. Allow me to explain!

Bodega is the Spanish word for "warehouse." When Spanish-speaking people began arriving in New York in large numbers during the first half of the 20th Century, they brought this word with them to describe small stores selling a variety of items including packaged food, beverages, cigarettes, newspapers, and candy. When prohibition was repealed, these stores also began stocking beer; some also sold fresh and prepared food like sandwiches, produce, milk, flowers, and eggs.

As the Spanish-speaking population of New York continued to expand, the word bodega began to be used outside Hispanic communities, where it was used interchangeably with other terms, including ones that referred to a store by what it sold ("candy store," "newsstand," "optimo," etc.) 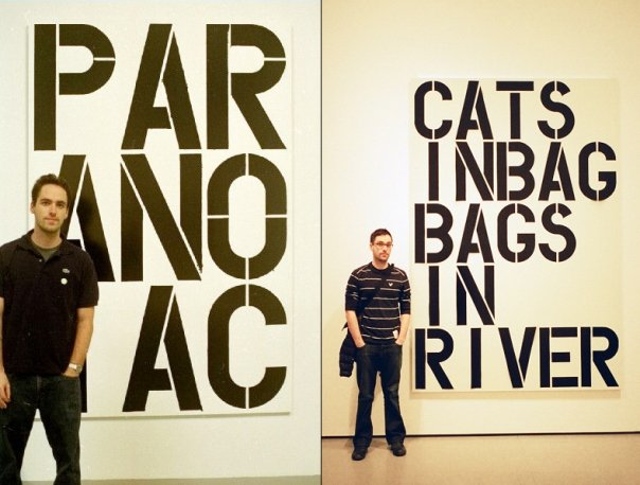 But critically, when a New Yorker hears the word "bodega" he also pictures a specific style of store design. This includes red and yellow awnings ("cold cuts and cold beer"), a variety of window ads, and a small sign advertising the presence of an ATM in back. The stores are usually small and often (but not always) on a corner. Inside we are not surprised to find a resident cat, slightly dusty groceries, and a few neighborhood guys bullshitting about current events. The proprietor is often behind the register, but is no longer always Puerto Rican. In bodegas with Muslim owners, beer is usually not sold, and instead you find a wider selection of non-alcoholic beverages.

Deli is short for "delicatessen", which is a German word (borrowed from France), meaning "delicacies." Originally used to refer to the food itself, it began to be used to describe the stores selling the food. It arrived in New York with the German immigrants after the Civil War, and reached its fullest expression when used by Yiddish-speaking Jews to describe restaurants selling corned-beef and pastrami sandwiches, among other items. These are now referred to by New Yorkers as "Jewish Delicatessens" or "Kosher Delis." Katz's and The 2nd Avenue Deli are prime examples.

As Yiddish and German speaking New Yorkers filtered out of the Lower East Side and into other neighborhoods, the word "deli" also began to be used to describe any place that sold sandwiches or similar grab-and-go foods. If a store consists mainly of a long counter behind which people are making sandwiches, with a beverage case off to the side and possibly a few tables, it will often be called a deli, but if a bodega has a small sandwich counter, and mainly sells groceries, it will usually still be called a bodega. If the deli mainly sells food from a single ethnic tradition, New Yorkers will often refer to it by that designation (the "Mexican place," "The Chinese place") even if you can also get sandwiches there.

"Corner grocer" isn't an expression in wide-use in New York. We do use "green grocery" or "green grocer" to describe a store which sells fresh produce (but which also may sell some packaged groceries, and which usually has a counter area selling cigarettes, candy, and other conveniences). In less racially-sensitive times, these stores were called "Korean Groceries", after the ethnic group that most often owned and ran them, but this is less common today, especially as other ethnic groups have replaced Koreans as the owners. There is some overlap between green groceries, "health food" shops, and regular "grocery stores" (which are usually much larger).

Often these expressions blend into one another: the local bodega sells sandwiches, the Korean grocer sells newspapers, and the deli sells cigarettes. New Yorkers aren't sticklers for exactitude in language. Most of the time we get by just fine grunting and pointing ("go downda da corna and get me some soder"). But the sad fact is that no matter what we call them, these independent stores are all getting driven out of business by the combined assault of high rents, competition from national chains like 7-Eleven, and fast delivery services like Amazon Prime and Fresh Direct. If you like your local place, make a special effort to patronize it before it's turned into a Chase Bank or Starbucks.

N.B. we discussed the peculiarities of New York accents, grammar, and language in a previous post in this column.

#ask a native new yorker
#original
Do you know the scoop? Comment below or Send us a Tip