This week's question comes from a New Yorker who's had it up to here with cash only restaurants.

Why are there so many cash only restaurants/businesses in New York? Besides avoiding the draconian fees charged by the credit card companies, is there another explanation? Is this a giant coverup to protect the profits of our city's ATM installation companies? Is ca$h still king?

I share your paranoia and feel that it is justified! Back by my old apartment there was an Italian place that seemed to be doing great business—full from 6 p.m. till closing daily. It wasn't cheap, either; we're talking $50/person for an entree and a glass of wine. Yet it didn't take credit cards, and every night you'd see a procession of embarrassed diners caught short on cash walking up to the ATM at the local bodega three full blocks away.

That's a bad way to end a night, in terms of customer experience, and since the place was clearly successful enough to afford the credit card charges, I figured that they must be running a tax scam, underreporting their sales to the state and pocketing the difference—maybe even laundering money for Brooklyn's last remaining gangsters or something.

After I got your email I asked a friend of mine who runs a bunch of popular retail establishments in a fast-gentrifying part of town for his thoughts on the phenomenon. I'll call him Pedro. He wrote back:

Any place that doesn't accept cards or that has a minimum charge, is running a mafioso-style business that screams they don't care about you. At our cafe especially we hear all day expressions of surprise that they can pay for a coffee with a card. OMG we *prefer* cards: No cash to lose or get stolen or miscounted. A business that can't survive the 2% credit card charge is going out of business tomorrow anyway. That's just a CDB: a Cost of Doing Business like the rent or insurance.

It's not optional, guys: you need to take cards. Which is why if the idea is cost savings, you're looking at a bad business with a terrible approach to its customers: basically they don't give a crap about you, just your cash. And yes, if a restaurant doesn't take cards they are stealing money from the state (no paperwork means no sales tax trail). You're giving the state money, their duty is to deliver it to Albany quarterly. Instead they steal it. Pretty awful? Most business people suck is why. Shortsighted, cheap, and unethical: Cash Only.

A place that doesn't take cards is bad, but a place that doesn't take cards and has an ATM right outside—that's just straight up evil. It's like "thanks for patronizing our establishment, let me kick you in the crotch on the way out!" Worse yet is the POPULAR cash-only place with the ATM, like Peter Luger's was back in the day, that makes you feel like the owner is just rubbing your face in it: "I got plenty of customers, so if you don't like this fleecing, go fuck yourself!" 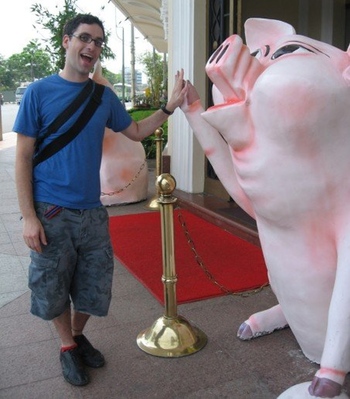 It seems to me, though, that there's been a general decline in the frequency of places like that. Maybe the IRS started cracking down—cash-only is a great way to attract their attention, and it turns out the Feds are quite knowledgeable about the typical proceeds of pizzerias and other all-cash businesses, and more than willing to subject the owner to one of those enhanced audits where they look at all your bank accounts, mortgage payments, the kind of car you drive, etc. After you get out of jail you'll be lucky to have a pot to piss in or a window to throw it out of, and that's the kind of risk that entrepreneurs like to avoid.

Or maybe it's the rise of the millennials as consumers? It seems like they're the ones most likely to be paying on cards, and not accepting them is a great way to discourage a whole demographic from patronizing your establishment. Or maybe you just don't want to get robbed by the kind of thieves which cash-only places attract. Seems like when you think about it, there's a lot of reasons to accept cards!

Luckily, the rise of Square and its competitors (and soon ApplePay and a whole class of bitcoin-powered solutions) has begun to drive down the cost and hassle of accepting credit cards. Soon, a lot of people aren't even going to be carrying wallets, and not accepting credit cards is going to mean turning away a large fraction of the public, so the cash-only establishment is probably going to become a historical phenomenon.

Weep not for the passing of these places. My friend Pedro is right: they're depriving the state of tax money that goes to support all of the necessary services of our society, like the police who they'd have to call when they get robbed, or the firefighters who come when their kitchen catches on fire. Fuck these owners; some New York traditions are really worth leaving in the past.

N.B. That's not to say cash doesn't have its place. Some customers prefer it for privacy reasons, say while dining at an S&M-themed taqueria, or shopping for sex toys. But it seems likely that almost all places will continue to accept cash alongside cards for the foreseeable future, so that's not an issue we need to need to consider yet.

N.B. 2: In an interview last month, Angelica Kitchen owner Leslie McEachern explained her longstanding decision not to accept plastic. "My whole philosophy on that has to do with the politics of credit cards, which have been part of the problem of the whole financial decline of this country," McEachern tells us. "Credit cards get people in a lot of trouble, and credit cards increase the price of the menu items. I don't see why for the convenience of credit cards for some people I should charge more for everybody."

I’m not going to question a genuine religious or political opposition to credit cards, but personally I think that’s putting the blame in the wrong place. The problem is that capitalism immiserates the poor and middle class and forces them to rely on credit to survive—blaming the credit cards is like blaming the crack pipes for the crack epidemic, or the fruit bats for ebola. The problem is the system, man.

#ask a native new yorker
#cash only
#credit cards
#debt
#dining
#original
Do you know the scoop? Comment below or Send us a Tip