Ask A Native New Yorker: Can I Drink A Beer On My Stoop?

This week's column is prompted by a New Yorker who wants to have a party in the driveway in front of his building.

Stoop drinking. I live in an apartment with access to a two car driveway/slap in front of the building but no backyard access. We are throwing a party/BBQ for more people than can fit in our apartment. There will be sidewalk cornhole competitions and concrete slab grilling, so naturally people will float between inside and outside. Is it actually illegal to drink in front of your own place on private property? Should we have everyone use solo cups? What happens if the cops stop us and inquire about our beverages? And why does a city that has EVERYTHING going for it have such a killjoy law on the books?

You have a God-given right to drink anywhere on your own private property: stoop, driveway, garden, alley, trash room, roof, etc. This isn't Soviet Russia: New York has a four century long tradition of respect for private property and tolerance for what you do in your own house. The original city motto was actually "just mind your own fucking business" (in Dutch). 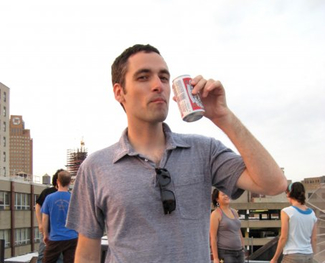 I love stoop drinking. There are few things more chill and New York than having a cold beer on your steps on a warm summer night, watching people walk by and making conversation with the neighbors. So when I hear of some jack-booted thug law enforcement agents rolling up and illegally ticketing people for open containers, when these poor citizens were clearly doing nothing wrong, it makes my blood boil.

The law here is absolutely clear: "the definition of a public place shall not include... within their own private property." Your stoop (or driveway!) is part of the building in which you live. If someone slips and falls there they're suing you, not the city. If the concrete cracks, you can't ask the city to pay for it; you (or your landlord) is on the hook. And yet, when Sergeant Johnny Cop rolls up, suddenly this is public property? Ridiculous.

There's no moral issue, either. If everyone in the city went down and had a beer on their stoop every night, the city would be safer, not more dangerous, because you'd have that many more eyes on the street. We have plenty of other laws that discourage wild-drinking, making a ruckus, etc. And if you inconvenience your neighbors, they still have the right to call 311 or 911 and report you, so there's no slippery slope argument here.

For all these reasons it's been obvious for years that ticketing people for stoop drinking is an outrageous and idiotic waste of police resources. Particularly since most of these tickets are getting written in poor neighborhoods, mostly to minorities, and often the people who can least afford to pay the fines. It's just incredibly classist and racist that if you live in Park Slope, you can basically stoop drink with impunity, and if you do end up getting caught for it, the local press will make it a whole big thing, but every night in Brownsville and East New York a dozen guys are getting caught for open containers and no one says shit.

Gothamist was a sponsor of one of the mayoral debates back in 2013, and we actually asked all of the candidates to go on record about this glaring inequity. Every major candidate agreed that you should "be free to drink a beer on your own stoop"—including Bill De Blasio. And yet, two years later, nothing has been done. We've tried in vain to get comment on this from the Mayor, and we've met a complete stone wall. All signs indicate the old policy is still in place, and it's still left to individual police officers to make up their minds (often wrongly) about what constitutes a "private place."

If this administration is incapable of issuing clear guidance to the Police Department that the citizens of New York City should be free to drink on their stoops, we stoop drinkers are going to have to find another candidate to support in the 2017 election. What's Scott Stringer's policy on this? Maybe it's going to take a Native New Yorker in office to finally straighten this out.

Until then, my advice is that if you're not rich or white, drink inside. Or do that thing where you soak a watermelon with a bottle of vodka; I haven't heard of anyone getting popped for that.

N.B.: Public drinking (but not public intoxication) should also be legal. Most cities in Europe (and a few in America!) allow you to buy a beer and drink it outside on a bench or while strolling around. That's very civilized and something we should fight for once we've achieved stoop freedom for all.

N.B. 2: The City Council is currently working to decriminalize a number of minor offenses, including open container violations. This is a smart move! If you get busted for stoop drinking, you shouldn't end up in jail because you failed to show up in court or pay a $50 fine. But the larger issue, that you shouldn't have gotten the ticket in the first place, still needs to be addressed.

#advice
#ask a native new yorker
#stoop drinking
#the law
#original
Do you know the scoop? Comment below or Send us a Tip