Are You Ready For Red Velvet Oreos?

Like most #brands these days, Oreo has made a point to keep itself hip to the times by reinventing its standard cookie in a variety of flavors and styles. In this day and age, you're the Ouroboros or you're dead. For their latest stunt, Oreo has morphed into the pastry equivalent of Mom Jeans, a.k.a.: Red Velvet.

The Limited Edition offering boasts cream cheese-flavored creme smooshed between two dark red cookies. These puppies are wicked sweet, perhaps even more so than the original flavoring; you can really feel your teeth pushing through the sugar crystals. There's none of the tang one usually gets from a cream cheese filling, it's rather more of a chemically sugar paste. But what can you expect from a manufactured cookie? Totally authenticity? Find out for yourself when they product drops on February 2nd. 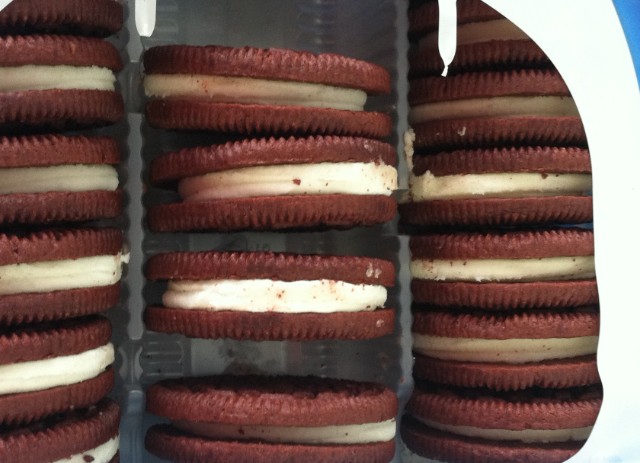 Call us crazy, but didn't Red Velvet mania peak, like, a decade ago? We were writing about red velvet cupcakes in 2004, for starters, and a very thorough investigation of Wikipedia tells us that harbinger of Cupcakepocolypse Magnolia has been baking up a RV version since 1996.

The only good thing about Valentines Day is red velvet Oreos!

#brands
#cookies
#nabisco
#oreo
#oreos
#red velvet
#red velvet oreos
#original
Do you know the scoop? Comment below or Send us a Tip