Are Those $9 Cups Of Bone Broth Worth It?

East Village restaurant Hearth recently made headlines by opening a takeout window serving hot cups of bone broth in paper cups with sippy lids. On the surface, the new offerings could be perceived as a harmless gimmick, or an FU to the oversaturated juicing trend. But, what's this? A 16 ounce cup of beef broth is $9 freaking dollars?! Slow your roll, Hearth.

We bought two small cups of broth to determine whether hot animal juice is a justifiable winter accessory or whether this ridiculous foodiot nonsense needs to be put to sleep like so many chicken carcasses.

Below, two takes on bone broth:

The Prosecution: Christopher Robbins A take-out window in the East Village now sells $9 cups of "sippable" bone broths. This isn't surprising, or even all that offensive. So why does slurping from a steaming paper cup of savory chicken broth make me feel like a decadent buffoon?

It's not because the product isn't tasty. Once your brain alerts your stomach that no stars or celery stalks are forthcoming (this can take a minute) the chicken broth goes down like a Proustian snow day.

The "hearth broth," made from "boiling two whole turkeys, 40 pounds of beef shin, and 15 stewing hens in a massive stock pot," is accordingly more complex, if muted. We added Calabrian chili oil for an extra 75 cents and the shiny unguent left our lips pleasantly tingling.

There's also something undeniably magical about boiling a bunch of animal corpses and drinking the resulting elixir. Who can refuse a potion that supposedly leaves you "full of energy, with glowing skin" ? Thanks, school bus full of dead birds!

But this idea that Olde World romanticisms can be priced like a latte still seems ridiculous. The wizened hands than stirred the broth cauldrons of A Simpler Time probably had to contend with actual boulders, not plastic ones inside a Murray Hill studio.

Toasting a healthier, simpler future with a cup of grass-fed beef liquid feels like saluting the dead German day laborers of Tompkins Square from your glass balconied elevator building. 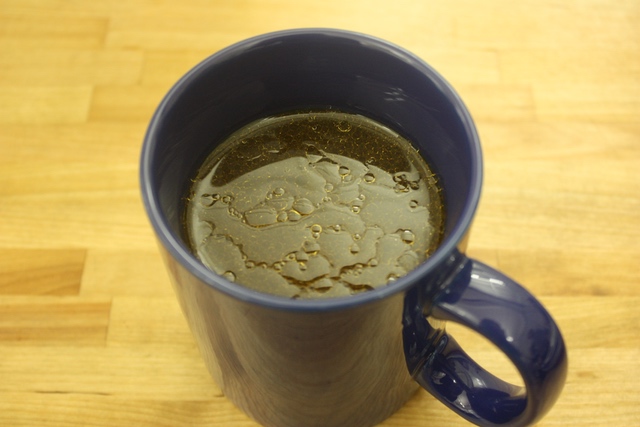 The Defense: Nell Casey To overthink the bone broth is to miss the point of the bone broth. Do you need to drink half a bottle of wine after work on a Tuesday? No, but you do it because it feels good. Was it necessary to purchase an $8 green juice the next morning to make up for it? Chances are it did more for your self-image than your crippling hangover. So what's so wrong about craving a cup of savory, steaming broth on a cold, wind-whipped November day? Is it really so different than, say, an afternoon hot chocolate? You could even argue that the broth is "healthier"—fewer calories, certainly, though the salt content is likely an issue—and for someone who doesn't have a sweet tooth, it's a fine alternative.

This boils down to the basic point of Brodo: it tastes freaking delicious. Unless you're a vegetarian or hate salt, there's no way not to enjoy the taste of these drinks. The Organic Chicken Broth, made with Pennsylvania Amish organic chicken, has all the comforts of a worn-in sweater; it's got a deep chicken flavor, fragrant with a touch of onion, and probably the most soothing thing you could sip during cold season. The Hearth Broth, made with chicken, turkey and beef, was also excellent, a touch heartier than the chicken version, though we ordered our fortified with an extra shot of chili oil, which—while great for opening the nasal passages—made the broth a little too heavy and rich.

Finally, the cost. Yes, these broths are obviously expensive; one might say a touch too expensive, especially the $9 large beef job. But consider the current high cost of meat, especially the already pricey organic stuff. It takes a good amount of meat and bones to make a broth as rich as these, not to mention it takes a lot of time. Several hours worth of time just to do all of simmering, plus extra steps to brown the bones and meat; skim off all the fat; strain the broth; etc. You don't go to a top notch steakhouse and expect to pay supermarket prices for your Prime Rib, do you?