After the Ramen Burger forever altered the fundamental nature of the Japanese dish back in 2013, everyone was looking for a way to cash in on the ramen zeitgeist with their own noodle food mashup, to varying degrees of success. Osaka Grub, a new stand opening up in the Essex Street Market next Tuesday, looks to transform another Japanese culinary staple into a familiar American template, making okonomiyaki sliders using the Japanese pancakes as the buns.

David Senn, a London ex-pat, and Diana Tam, a native New Yorker, met in Tokyo and became enamored with the savory dish, which translates to "what you like." "We take a very traditional approach on our regular okonomiyaki," Senn told us, a version ($8) of which they'll be griddling up at their new quasi-brick-and-mortar. The same batter is then poured into molds to create the slider "buns," which will hold a beef patty, pickled ginger, bonito flakes, and aonori, a type of green seaweed ($6). 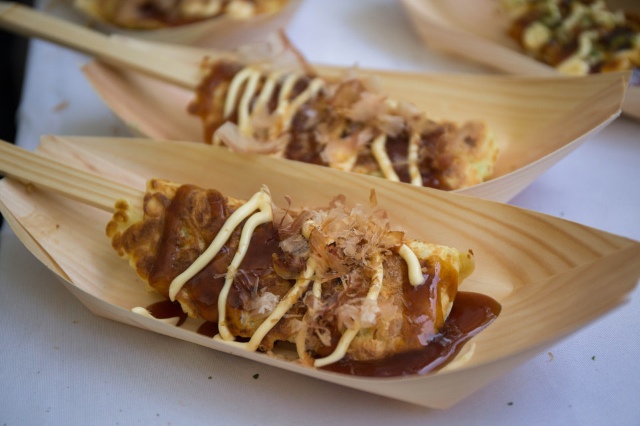 The duo have been popping up at mobile markets like Hester Street Fair and LIC Flea & Food, where they began their business in 2015. Quick Bites columnist Scott Lynch tried the burgers at Hester earlier this year and determined that the burgers had "potential," which will presumably be maximized with a more formal kitchen to work in.

They'll also be making Hashimaki ($6), a riff on okonomiyaki that's rolled onto chopsticks for portable eating, then topped with either bacon and bonito flakes or a vegetarian mushroom and miso. Karaage—deep fried chicken—will also be on offer, either plain ($6) or as a Karaage Slider ($4) on a potato roll.

For a peek at something similar to what you'll get at their stand, here's us learning how to make okonomiyaki ourselves:

#essex street market
#okonomiyaki
#okonomiyaki sliders
#osaka grub
#original
Do you know the scoop? Comment below or Send us a Tip
A new Gothamist is coming! We’ve moved comments over to our beta site. Click here to join the conversation and get a preview of our new website.