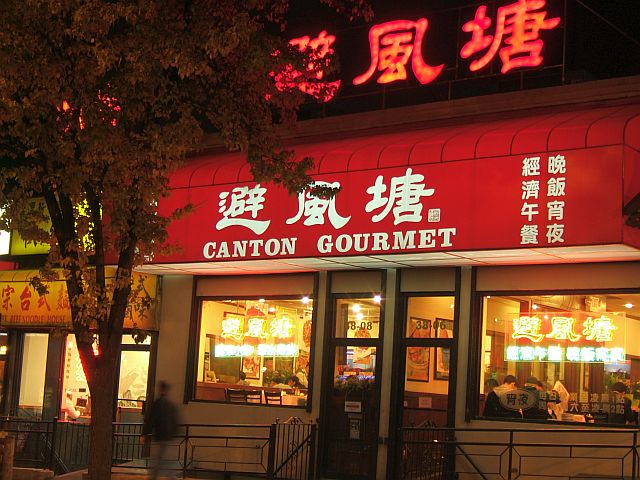 Years ago before the nearby Flushing Mall opened, Prince Street near 38 Ave. was well known for the "octopus guy", a friendly gent who grilled up skewers of baby octopus, among other things. When he vanished, we barely frequented that block. The other restaurants just never held much appeal; instead we stuck to Little Pepper, a nearby bastion of fiery Sichuan flavor. Largely because of the crowds and the huge posters of its specials Gothamist had always been curious about a spot with the auspicious name Canton Gourmet. Thanks to a Chowhound post that whet our appetite, we finally ventured inside last night. 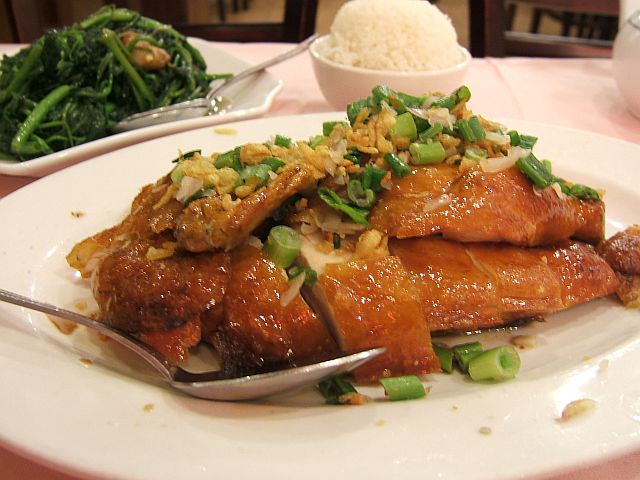 There was only one other solo diner in the joint; the rest of the tables were filled with families. So we sipped some tea and munched on a small dish of salted peanuts while perusing Canton Gourmet's encyclopedic menu. After glancing at the 175-item roster that included all the usual suspects plus some more challenging items like an appetizer of salt baked snail and an entrée of pig intestine with sour mustard, we were quite overwhelmed. And then we looked up and saw a poster with a Shrek-sized portion of golden-skinned chicken chunks showered with fried garlic and chives. The photo was appetizing but it was the dish's name that sold us: Famous Garlic Aromatic Crispy Chicken. Leaving aside the grammatical issue of whether the garlic itself was famous or the entire dish, we chose our second item, sautéed hollow cress.

One taste of the garlic-infused shin hong gai, with its crunchy Beijing duck like skin and toothsome tender flesh, and we knew that it's the entire dish that deserves the designation "famous," not just the garlic. The crunchy shards of pungency are aptly described as "aromatic." Crunching on salty bits of fried skin and bone reminded us of tea-smoked duck sans smoke. Bai fung tong, or stewed hollow cress, brought even more garlicky goodness to the party in the form of tender whole cloves. We can't wait to bring a crew to this place and dig deeper into its menu. And if anyone's feeling especially flush then they can pop for the $150 portion of shark's fin with crab meat.

#baby
#beijing
#Canton
#chicken
#flushing
#flushing mall
#food
#gothamist
#In the 'Hood
#prince
#prince street
#restaurants
Do you know the scoop? Comment below or Send us a Tip