Our latest installment of Quick Bites brings us to the Upper West Side for a meat-lovers utopia.

THE VIBE
White Gold Butchers is the brand new, extremely meaty restaurant from April Bloomfield, justifiably renowned for her also-extremely-meaty restaurants Spotted Pig and The Breslin, among others. If you're a Bloomfield fan, and I definitely am, you're already excited. So just go today, and I mean like right now, before the place gets slammed.

That White Gold is located in the heart of the Upper West Side, where food mediocrity so long reined supreme, is a huge bonus for locals and frequent visitors alike, as well as further, welcome proof of the downtownification of the restaurant scene up here.

White Gold Butchers is so named because there's an actual, extensive, (and expensive) butcher shop here, run by Jocelyn Guest and Erika Nakamura, with lots of different cuts and sausages and ground-up animals for you to bring home. (The term "white gold" is a butcher's term for the fatty parts of a cut of meat.) These counters, plus the open kitchen, take up the northwest corner of the modestly-sized space. 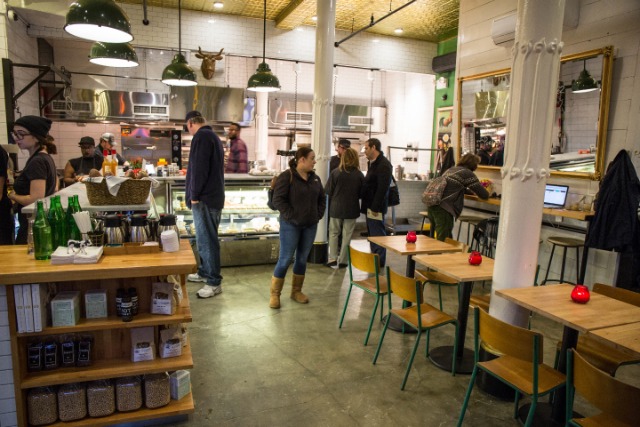 The other part of White Gold is where you sit and eat, on comfortable padded benches and wooden chairs or, if you're in a hurry, at one of the stools by the window on 78th Street. The decor is all about meat, too, with cow busts and figurines, posters of knives, and an amusing steak-cut wallpaper in the bathroom.

During breakfast and lunch you order at the counter (this can be a bit confusing and chaotic; they need to figure out a better line system than the free-for-all that's in place now) and bring one of those numbered flags to whatever seat you can find. Dinner service, which is supposedly starting tonight (Tuesday), will feature full table service.

THE BITES
It's easy for me to lapse into superlatives with Bloomfield's cooking—her big flavors really hit my sweet spot—but I must say that several things I ate here last week felt like a new "best." The Porchetta ($16), for example, is stupendous, with rings of sweet fat, a thick coat of crackling skin, and plenty of wonderfully tender meat. Too often the seasoning overpowers the pig in this dish, but not so with Bloomfield's version, which is topped with just a hit of chunky, oily, herb-y sauce. This is porcine perfection.

Also tremendous is the unassuming-looking Rotisserie Chicken. The bird is good in and of itself—chewy skin, juicy meat, respectable lineage—but it's the robust green sauce that really makes this dish special. When I asked Bloomfield what was in it she told me "it's just a salsa verde" and then rattled off like ten ingredients that included anchovies and capers.

The Chopped Cheese ($11) has been getting a lot of attention from a cultural perspective, and that's a good thing, but if you only want to know how White Gold's version tastes, I can say that this sandwich is delicious. It's big, the burger meat has a real, rich presence, the melted American is laid on thick, and there's a whole mess of pickles adding some bite. Greasy as hell, sure, but the poppy roll is up to the task of holding it all together. 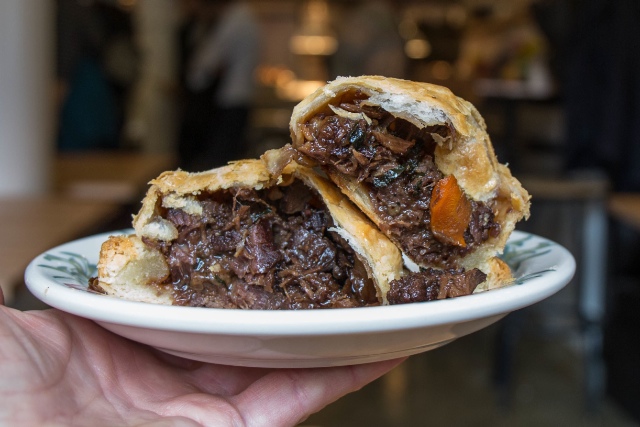 The homey, hearty Ham Hock and Sauerkraut Soup ($8) was maybe a bit too salty the other evening, but I'd still get it again in a second. Or whatever other soup they're making that day. The Beef Pasty is like eating a first-rate classic stew inside a handy pastry pocket. The pre-made Ham Sandwich ($8) is a solid grab-n-go option, stuffed with high-end versions of everything all in their proper amounts. And my only vegetable in two meals was fantastic, a bowl of spicy mashed pumpkin with a generous sprinkling of caramelized roasted seeds adding both crunch and sweetness.

THE VERDICT
I'll be coming here as often as possible until the waits get too long, and if you like eating meat, I suggest you do the same. White Gold is right in Bloomfield's wheelhouse, and she crushes it.