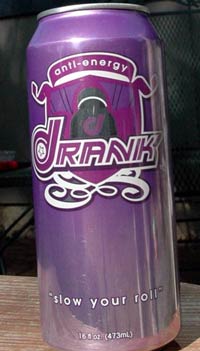 Get ready to "slow your roll" New York; the mass-produced version of "Purple Drank" will hit shelves in Manhattan and the Bronx tomorrow, Fork in the Road reports.

According to Wikipedia, the homemade version of the beverage is "a recreational drug popular in the hip-hop community of the southern United States. Its main ingredient is prescription-strength cough syrup containing codeine and promethazine." Purple Drank was supposedly popularized by Houston's DJ Screw, who then died in 2000 from a codeine overdose, thus assuring the drink's eternal fame. More recent celebrity cachet comes courtesy Britney Spears.

The canned product being unleashed on famously frenetic New Yorkers tomorrow is a little more tame then the folk concoction. Drank is a non-alcoholic, grape-flavored beverage made with melatonin, valerian root and rose hips. A publicist tells Fork in the Road:

We're calling this the extreme relaxation beverage. Every aspect of this calming drink was inspired by today’s popular hip hop artists who embrace the much sought-after hip hop lifestyle that encourages people to capture a stress-free state of mind.

A spokesman for local distributor Good-O could have definitely used a Drank when we called this afternoon. "Wrong number!" he snapped, and hung up before we could explain. After several repeat attempts, he finally took the call and explained that "the publicists are on their way up from Memphis." So until the Drank store locations are revealed, you'll just have to make do with grape soda and Robitussin. Back in the day, when the quest for sedation used to mean something, kids called that Robotripping.

#anti-energy drink
#drank
#new york
#nyc
#purple drank
Do you know the scoop? Comment below or Send us a Tip