When news came out that Anthony Bourdain would be wrapping up No Reservations on the Travel Channel and moving his act to CNN we wondered where the always-entertaining sometimes-chef would cap the show off. And now we know. Brooklyn, of course. 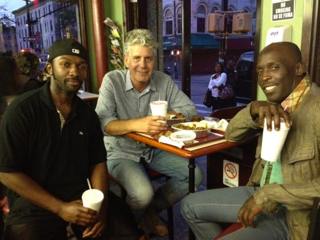 The end will be Wired(Twitter)

With a little help from Michael K. Williams (always Omar to us), Bourdain has wrapped up a tour of the borough for episodes that presumably will air in the show's final run next year. Of course, this isn't the first time Omar's been comin' round to show Bourdain around. He was in the 2009 No Reservations episode shot in Baltimore (along with much of the cast for The Wire).

As for why Bourdain is moving to CNN? "We are all assuming a worldwide news organization can get us into locales we otherwise might have problems with. Libya. The Congo. Myanmar...Yemen." Now that would be something!

Anyway: The final location Bourdain will be dropping by sans reservations? Jay & Lloyd's on Avenue U and East 28th. You have been forewarned.

#anthony bourdain
#bourdain
#brooklyn
#cnn
#MIchael K. Williams
#no reservations
#omar
#the wire
#travel channel
Do you know the scoop? Comment below or Send us a Tip