Antarctic Cuisine at The Explorers Club 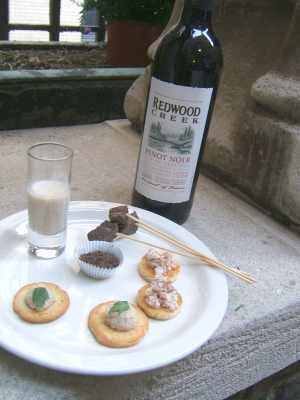 For some reason we've had a thing about Antarctic expeditions and libations lately. It all started with an evening of Antarctic cuisine at the Explorer's Club last week sponsored by Redwood Creek Wines.

Prior to the dinner we had surmised that Antarctic cuisine consisted of permafrost and whale blubber smoothies. All kidding aside, the food which was prepared by Gene Rurka, the club's exotic food's chairman wasn't half bad. Our favorites were the turtle bisque and the Pheasant Breast Pâté, though we do find it somewhat unlikely that Sir Shackleton and his men were eating pâté on their expedition. Renowned polar historian T.H. Baughman gave a fascinating account of how Shackleton rescued his men and pointed out that the Pemmican Pudding wasn't entirely authentic. The version Shackleton and his men ate would most likely have been covered in dirt. While there were several suggested pairings for the exotic foodstuffs, Gothamist stuck to the Pinot Noir.

Now that we've learned of the existence of Endurance Pale Ale, another alcoholic beverage that's linking it's brand to Antarctic explorers, we can only wonder what's next. Can a wave of Antarctic-themed tapas bars be far behind?

#bars
#club
#food
#food events
#gothamist
#Pale Ale
#Pinot Noir
#south american
#wine
Do you know the scoop? Comment below or Send us a Tip
A new Gothamist is coming! We’ve moved comments over to our beta site. Click here to join the conversation and get a preview of our new website.