The beloved Buffalo chain Anchor Bar—where in 1964, Teressa Bellissimo purportedly invented the wing that changed the face of drinking-food menus the world over—opened its first NYC location this week. Their original Buffalo Wings can now be found in a deep, sprawling space on West 57th Street.

Always game to try new things from exotic places, three of us (non-Western New Yorkers all) descended on Anchor Bar at happy hour Thursday night. The atmosphere and decor was about what you’d expect from a sports bar in Midtown: 13 TVs dominate the bar area up front, a pair of dining rooms in back seem good for larger parties, the shouts of after-work boozers bounce off the brick walls.

There was also an unbelievably loud jazzy-type band playing, though it was unclear whether that would be a regular feature here, or just a special treat for the grand opening.

Astonishingly, there was no Bills or Sabres memorabilia anywhere to be found, though there is a collage of autographed celebrity photos on the wall near the bathrooms, all obviously taken from the Buffalo original. Lots of license plates are hammered on high around the bar, and a giant buffalo wing hat at the hostess station provides the only touch of whimsy.

The Anchor Bar menu is dominated by Buffalo wings, available in ascending degrees of spiciness, as well as other sauced-up Buffalo items. A full complement of burgers, several highly caloric salads, a couple of pizzas, and entrees like Salmon and Fettuccini Alfredo round out the offerings. There are 20 beers on tap (none from Buffalo), and the cocktail menu has selections like a Chocolate Martini and a frozen Mudslide.

And how are those legendary wings, you ask? Here’s my theory about adored regional favorites: often the fond feelings one has are rooted more in nostalgia and homesickness than in food that actually tastes good. We tried three kinds of wings last night—Hot, Suicidal, and "True Boneless"—and not one came within a mile of all the amazing versions of these things we already have here in the big town. It should be noted, however, that all three were better than the non-wing Anchor Bar dishes we ordered, which included a lifeless Beef on Weck and a six-pack of dreary, undercooked Pizza Logs. 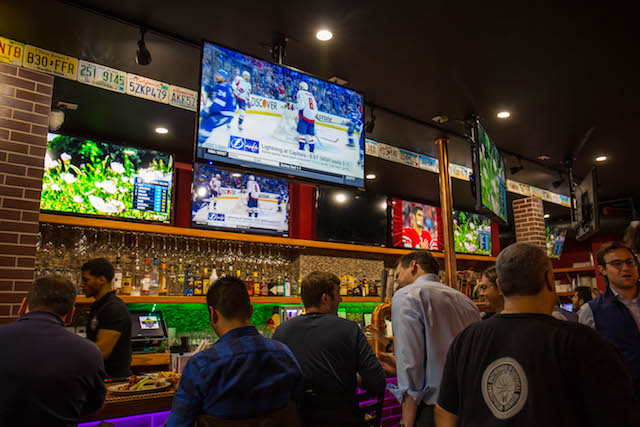