We had heard tales of folks getting through Yom Kippur fasting with the help of little, bullet-shaped helpers: caffeine suppositories. In the name of Self-Investigative Journalism, Gothamist publisher Jake Dobkin gave one a try in hopes that the unmarked suppositories sold out of a cardboard box in a South Williamsburg pharmacy could break him of his crippling green tea habit. Here is his tale.

12:29 pm: Insertion complete. Surprisingly easy—the lubricated torpedo shape really shoots up there. It does leave a slight sting, and a slight feeling of pressure, but it's probably less painful than butt-blowing a shot of espresso. Going back to my desk to await the action.

12:35 pm: No truly noticeable changes. I do feel awake and alert, but having something stuck suddenly up your butt will do that to you regardless of caffeine intake.

12:40 pm: Slight feeling of warmth emanating from nether regions, like my butt chakra has been opened.

12:43 pm: Still not feeling much. Worried the 100oz of green tea per day I've been drinking has immunized me to the effects of 100mg of caffeine taken via butt. Reminds me of the time we made pot brownies in college, and everyone ate two and after an hour I still didn't feel anything, so I decided I must be immune, and ate like three more. Then they kicked in and I had to be restrained for twelve hours because I stripped naked and tried to jump out the window. I hope that doesn't happen again today. My butt is capable of worse.

12:50 pm: Maybe feeling something now. Like a slight feeling of pressure behind the eyes, which could be the cold I have, but could also be the opening of my third eye to the present moment, ifyouknowwhatimean. While I wait I'm researching how long it takes a suppository to melt. The authorities at Yahoo Answers seem to indicate 20 minutes, so we're entering a critical phase. If I close my eyes, I see a man dressed as a Native American, beckoning me to walk into the light and insert another suppository. I decline. 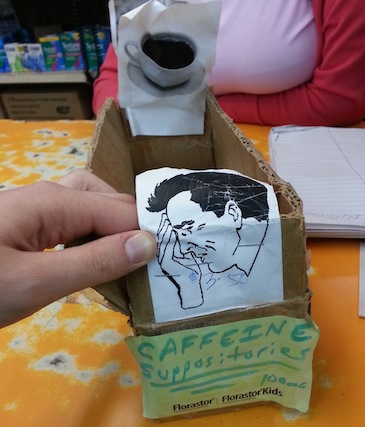 "Loosy" caffeine suppositories can be purchased in bodegas out of cardboard boxes (Samantha Shokin / Gothamist)
1 pm:

Reading up on previous stunt suppository journalism. Gersh's piece for Brooklyn Paper in 2010 sets a pretty high bar. I feel particular respect for his use of the words "anus" and "rectum," and immediately regret my previous use of "butt" here.

He reported that he had "so much energy, [he] could have built a Third Temple." That makes me begin to worry I've somehow done this wrong, because I'm still not feeling much different than usual, although I'm grateful to not be suffering from some of the other effects he reported: "every 20 minutes, caffeine’s magical diuretic qualities manifested themselves by sending me back to the bathroom — even though I had consumed no liquid."

1:04 pm: IM [Gothamist editor] Chris [Robbins]: "are you getting anything off these? "i'm not- what if we're the victim of some elaborate orthodox con?" He replies: "are they in your butt?!?! I haven't used mine yet they're just staring at me." I feel intense desolation and anger, and reply "i can't believe you'd desert me on the field of battle like that." You really know who your friends are when things start getting stuck up butts. I write this phrase down, as it may prove useful in a Kickstarter campaign about suppositories I just thought about five minutes ago (1000mg caffeine suppositories, tagline: "ride the ass dragon!")

1:11 pm: Ask Jen to get me lunch. Figure I should wait around here if things get hairy and I have to run to the bathroom, although so far, still nothing happening. Worried that this suggests I have a grave problem with caffeine. Definitely don't see how one of these could carry you through eight hours in temple, and I'm not sure you could fit two up there comfortably, although the Native American guy keeps asking me to give it a try.

1:41 pm: Notice I'm slightly sweatier than usual. Other than that, no buzz at all, so either this is the smoothest high ever, the Orthodox don't drink a lot of coffee, or this caffeine suppository trend is a total bullshit fraud. Beginning to wonder if anger is a sign of suppository working.

2 pm: Actually feeling kind of tired. Thinking about having a cup of tea.

[Editors Note: We regret not participating in this story, as we probably should not have looked at this website after initially agreeing to do so. It's...the green shirt and the leg-lifting.]

#caffeine suppositories
#day of atonement
#green tea
#stunt journalism
#why god
#yom kippur
#original
Do you know the scoop? Comment below or Send us a Tip
A new Gothamist is coming! We’ve moved comments over to our beta site. Click here to join the conversation and get a preview of our new website.