Moving to a new neighborhood can be exciting, but it can also be very difficult to bid farewell to neighborhood favorites that you've come to rely on over the years, which is exactly the problem faced by the de Blasio family as they begin their new tenure in Gracie Mansion. During a press conference addressing NYPD reforms yesterday, the Mayor took a moment to discuss his family's first night in the new house: "Everyone knows my love for my neighborhood in Brooklyn and my home in Brooklyn, so you know, it was a little strange to come home to Gracie Mansion," the Mayor explained of his return from Italy. "But everyone there made us feel very welcome."

The Mayor went on to discuss his "concern" over not finding replacement for his beloved Park Slope haunts, which included Colson’s Bakery, Bar Toto and a solid place to get espresso.

Luckily, Mr. Mayor, we're here to help. Below, our suggestions for equatable UES eateries that should act as stand-ins before you end up back in the comfort of Park Slope—whenever that may be. 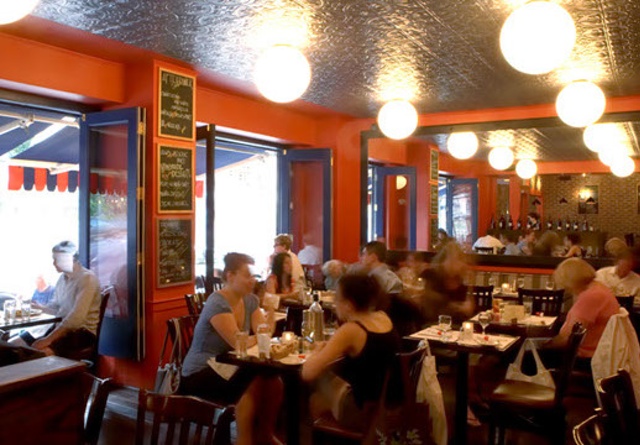 Instead of Bar Toto, try...Cavatappo Grill & Wine Bar: It's a tall order to fill a family favorite like this one, but there's lots to love about Cavatappo, especially their excellent pastas like the Spinach Pappardelle with succulent roasted duck and earthy porcini mushrooms tossed in a cream sauce. Also of note, the homemade spaghetti with lamb ragu, braised lamb shank with Israeli cous cous and the grilled shrimp. They're also open for brunch for a nice family meal but the candlelit atmosphere is the perfect place for a romantic dinner for two (hint, hint).

Unfortunately, the restaurant doesn't do pizza. For knife-and-fork worthy pies, check out the casual but tasty Nick's Pizza, which offers create-your-own pies with all the toppings plus calzones, pastas and salads. For something closer to your roots, check out San Matteo, which fully embraces the quirky Italian tradition of topping pizza with potatoes. 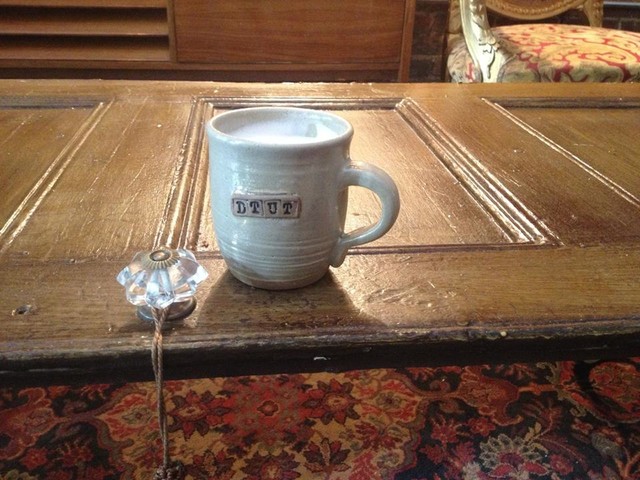 For great espresso, try...DTUT: Ignore the bountiful Starbucks outlets and head to this independently owned coffee shop serving Irving Farms coffee and espresso drinks, as well as sandwiches, snacks and—after dark—wines and beers. The name, which stands for "Downtown Uptown," speaks to the vibe inside, which rivals any Bedford Avenue spot for its collection of twee vintage furniture. But because it's not in Brooklyn, the shop manages to make it charming, while serving excellent lattes, chai teas and other caffeinated libations. 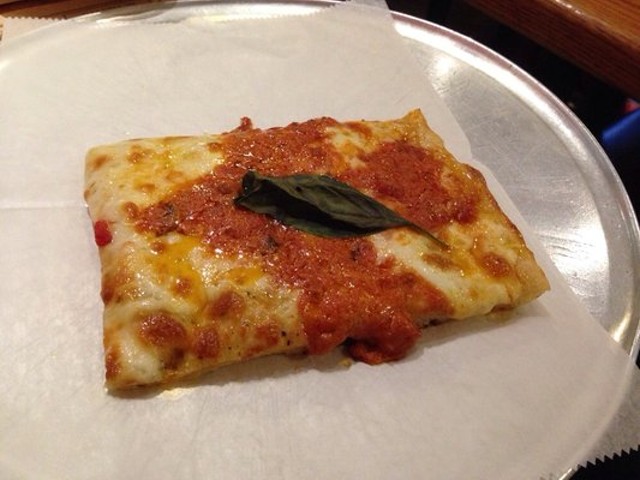 Grandma Slice from Delizia 92 (via Yelp)

Instead of Smiling Pizza, try...Delizia 92: It may not be Patrick Stewart approved (yet), but this corner pizzeria bakes up some quality slices and pies, especially their addictive Grandma slices, which are perfectly seasoned with garlic, oregano, vodka sauce and the intangible flavor of Nonna's love. Their no-frills pies are exactly the kind of thing beloved by locals at Smiling, plus they offer more hearty red sauce fare in their adjoining restaurant. But if a corner slice is your goal, look no further. 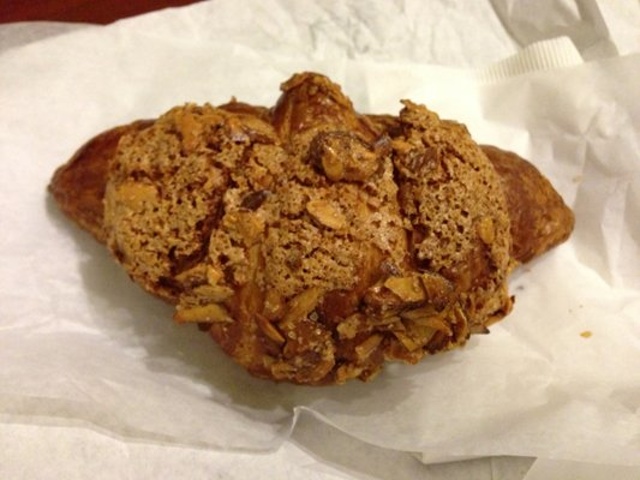 Instead of Colson’s Bakery, try...Yorkafe: This diminutive York Avenue cafe is within perfect walking distance for a morning pastry and coffee, and while they aren't making their pastries in-house like Colson's, they do import them from a little spot called Balthazar. Not too shabby. Yorkafe also provides a selection of sandwiches, salads and other savory treats for a casual lunch to-go. Also worth a visit (or 100), nearby Glaser's Bake Shop, a 112-year-old institution that bakes up one of the city's best black and white cookies. 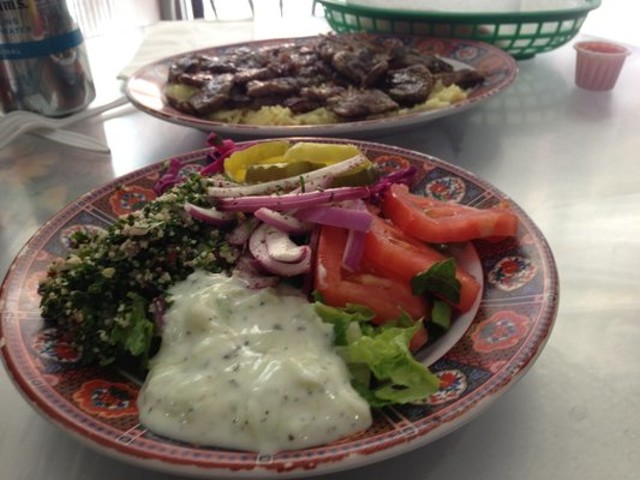 Instead of Mr. Falafel, try...Falafel House: You won't get the charming Egyptian motif of the Brooklyn falafel joint, but when it's great hummus and tender chickpea balls you're looking for, this miniscule storefront is the way to go. Favorites include the hummus platter ($4), which can be bulked up with all sorts of salads, spreads and toppings for a larger meal. Also of note, their excellent Falafel Sandwich ($3.95) with tahini and the smokey Baba Ghannouj platter, served with pita. 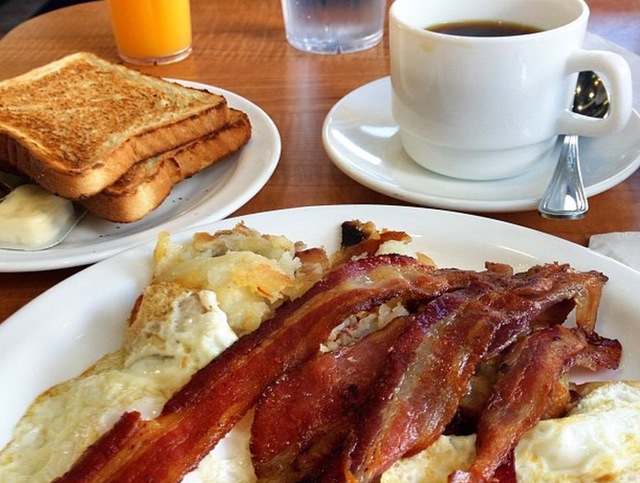 Instead of Purity Diner, try...The Mansion Restaurant: Your new neighborhood boasts a plethora of diners to choose from; everyone has their favorites—you couldn't tear Bloomberg away from Viand, apparently—but luckily one of the best loved is just a few steps from your backyard (aka Carl Schurz Park). The Mansion Restaurant has everything you want a diner to have: old timey swivel stools, lots of different pancake toppings and an enormous menu that could take half the morning to read in its entirety.

We couldn't recommend something to eat here—everyone has their own diner go-to—but we'll point out that they get their bread from Orwasher's and their cheesecake from Juniors, so we'll let you come to your own conclusions. We'll also let you be the judge of caliber of their coffee. 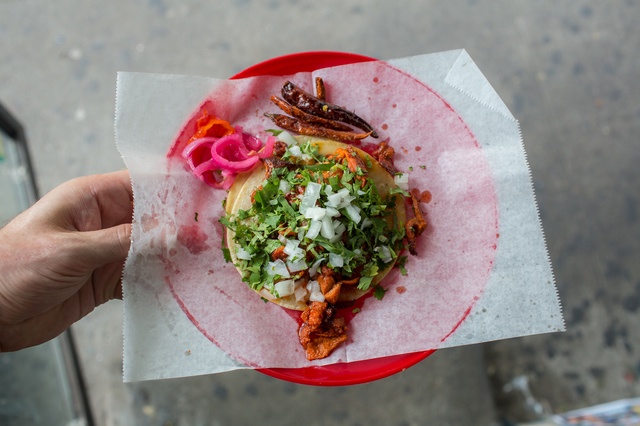 Instead of Tacos Nuevo Mexico, try...Taco Mix: It's not that there aren't decent tacos spots on the UEs—see Mole and soon-to-be-uprooted Cascabel Taqueria—it's just that the tacos a few blocks north are so much better. Namely, at this tiny Spanish Harlem gem, where the tacos are so good you don't even need a chair to enjoy them (seriously, the place has maybe four seats). Absolutely order the al pastor, which you'll see spinning lazily on a spit in the window; order them "con todo" with cilantro, raw onion and salsa, then further fortify with the DIY toppings like pickled onions, dried chilies, radishes and lime wedges. Another plus: the tacos are just $2.75 each, so nobody can take a dig at your money-spending decisions.