An Open Letter to Ted Allen and 'Top Chef' 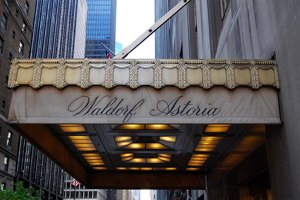 The following open letter from The Ghost of Oscar Tschirky does not necessarily reflect the opinion of Gothamist. We would like a plate of Waldorf Salad now, though.

On last night's episode of “Top Chef” you slammed cheftestant Ryan’s “Waldorf Salad,” calling it a debacle in not so many words. You deemed the failed dish all the more insulting because the episode’s block party took place in the Waldorf Salad’s supposed culinary cradle, a place you called “Middle America.”

Mr. Allen, that salad you speak of is from New York City. Since in life I was a maître d'hôtel, and not a chef, over the years some have disputed the exact origins of Waldorf Salad. One thing is for certain, however: Waldorf Salad came from the Waldorf Hotel. It’s not from Ohio, not from Illinois, neither of the Dakotas. [Ed.: Reached for comment, Waldorf Astoria press liaison Gauri Kitchlu confirmed that Tschirky created the Waldorf Salad in the late 19th century and included the recipe in his 1896 book, The Cookbook by Oscar of The Waldorf.]

A bunch of us—Anton Carême included—were sitting around and decided if you Top Chef people are going to rattle on about “authentic Chicken Piccata” and whatnot at the “Judge’s Table” with straight faces, you may as well get your facts and figures checked by long dead maître d'hôtels. Please enjoy this recipe, one of many such recipes that originated in the great City of New York that changed the world inexorably, spun out of the late 19th century like a fruit bat in the night, like molten sparks of intense flavor combinations thrown from morsels bent on conquering unsettled and restless tongues, or whatever. Until then, I remain,

Mix apple and celery and add the nut meats which have been broken in pieces. Moisten with mayonnaise thinned with a little cream. Serve on lettuce or on a bed of shredded cabbage. Serves 6.