No matter how much we delude ourselves, summer is dead. Typically, winter's frigid grasp means the end of beach trips, but this season, one Riis Park Beach Bazaar vendor is keeping the spirit alive with an off-season restaurant and bar in the Bay 9 pavilion on the water. Wildfeast Foods, who spent the summer slinging super fresh seafood in the space, will spend the bleak winter months doing the same.

Beginning this weekend, the restaurant will be preparing grilled monkfish sandwiches, shark tacos and the other locally-caught fish dishes they are known for, with heartier seasonal dishes including lamb from the North Fork, short ribs and Long Island Clam Chowder in the pipeline as well. They're also doing a weekend brunch beginning at 10 a.m. with scones, sweet potato waffles, local eggs and a traditional Irish breakfast. Many of the menu items will be priced under $10. 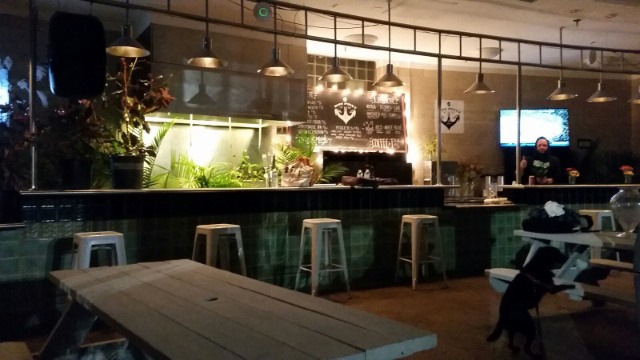 Things kick off this Saturday and Sunday with an all-ages Oktoberfest party with beer and brats, and the team promise other special events like crab boils, a Halloween concert, farmer's markets and a Harvest Festival. In the bar component, which they've heated and expanded for the season, expect craft cocktails and the like, plus a continuation of the live music program that made the Bazaar a destination this summer.

The Rockabus has, sadly, parked for the winter, but you can take the 2/5 train to the Flatbush Avenue - Brooklyn College station (the last stop) and then pick up the Q35 bus from there. They're also offering free parking if you've got four wheels of your own.

#bay 9 pavillion
#jacob riis
#new restaurant and bar radar
#oktoberfest
#rockaways
#wildfeast foods
#original
Do you know the scoop? Comment below or Send us a Tip