An Ode To Tad's: The Best Budget Steakhouse Left In Midtown There's only one Tad’s Broiled Steaks left in New York City, and you would do well to experience it now before its inevitable transformation into a Pret A Manger or Sweetgreen.

Drawn by the orange flame of steak-fat flare-up through the painted window, you go inside. You grab a tray, say which steak you want, and they toss it on the flaming grill. If you’re a neophyte or simply haven’t been in a while, you may say a word about how you’d like your steak cooked. That will earn you an indulgent nod or a derisive laugh. The steak, which runs from $9 to $25, depending on the cut, is pretty thin.

Served with potato and garlic bread, you have the option of adding onions and mushrooms to your steak. The grill man won’t tell you, but those cost extra. As you slide your red plastic tray along the aluminum rails toward the register, various temptations reveal themselves. For the sophisticate, it’s the wine glasses covered in saran wrap. For the less serious, strawberry wine coolers. Then sodas and desserts. The cashier dispenses your salad (included) with tomatoes (extra cost).

You pay, take your tray to a table under a faux-Tiffany lamp, and enjoy your food. And the steak’s not bad. It’s the cut you asked for, and plenty of food. 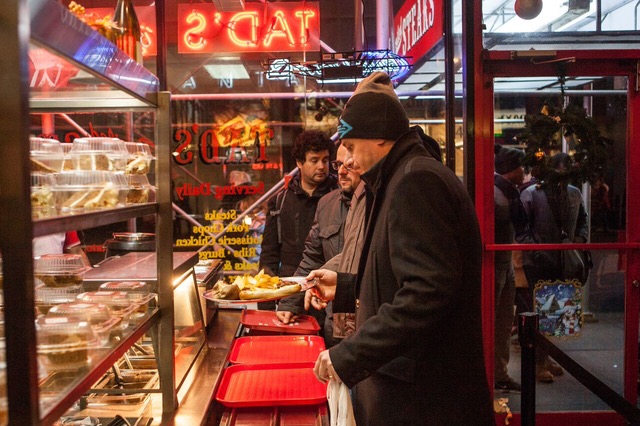 When I came to New York in the 1990s, Tad’s was an immediate favorite of mine—specifically the one on 14th Street, in the shadow of the then-closing Palladium. Part of it was steak, which always fortifies my spirits. The cafeteria style was another reason. I didn’t have too many friends at first, and I needed a place to sit and eat without having a waitress acknowledge my solitude.

Even then, the place was frayed at the edges, with peeling red velvet wallpaper, and cups of green jello on trays of ice. It gave me what I wanted, and I was always happy there. When it closed, to make way for a new dormitory for New York University, I shook my fist at the heavens, and moved on.

Tad’s Broiled Steaks was once something of an institution, with eight New York locations, including two in Times Square serving up cheap flame-grilled viands.

Today, New York’s last Tad’s stands on 50th Street, tucked off of Seventh Avenue behind a beat-up TGIFridays and a perfunctory Tim Hortons—all three owned by Riese Restaurants. In the years since I’d last been to a Tad’s, the city has changed. But Tad’s has not. The grill by the window, the red trays, cellophane-covered wine glasses, unhurried, dark and mostly clean dining room.

But it was all a bit more striking as a vestige of a better, more democratic age in New York. While lunchtime lines snaked and shuffled at Chop't down the block, Tad’s was quiet, one of the last of the Mohicans in a Mohican hospice, with the lights off in the hallways and the staff trying to sell the Mohican hospice furniture.

I took my T-bone, the cheaper of the two offered, to the back of the dining room. The steak was good enough. It was steak, and better than you’d get at a diner most of the time. It was cheap compared with other steaks, though not with other lunches. The drink, the onions on my steak and tomato on my salad all added up (for a grand total of $23.05). But I’d been told as much.

As I ate, I experienced a certain elation, as did my lunch companion. And I wondered why I was so happy at Tad’s. I realized that it was the short con, of old America.

One con or another is unavoidable. Every nickel, on its way to becoming a dime, must pass through some trickery. Until the Rapture, there will always be opposition and a cash register to help us navigate it.

Tad’s way—the short con—may seem unpleasant or confrontational to people used to the cloying smarm of our current slate of Olympian “established brands.” But I find it less insulting.

At Tad’s, there are no adjectives on the walls, no promises that the cows have been “grass-fed” or that their flesh is “char-sizzled,” and no aspirational exhortations that you be a better you. It’s just a steak.

Tad’s Broiled Steaks may or may not make you a better you. But it will fill you up. And they will leave you alone, in almost every sense, which is nice. The steak may or may not be juicy. They never said it would be. But they'll ladle on some extra juice, no extra charge.

As the year draws to a close, it’s customary to reflect on what we’ve gained and lost in the interval. And there are still many places that evoke what New York was—a place whose gruff indifference allowed for a feeling of true adult freedom—though there are fewer each year, and fewer still with steak. So go, while you still can.

Tad's Broiled Steaks is located at 761 7th Avenue, near the corner of 50th Street. Reservations not accepted.

Colin Dodds is a writer who's lived in New York City for the last twenty years, more of them good than bad. Check out his work at thecolindodds.com.

#midtown
#tad's
#original
Do you know the scoop? Comment below or Send us a Tip