"So far, meat has never come through my front door," Phil Johnson explains of his fish friendly new restaurant Gloria that opened recently in Hell's Kitchen. Chef and business partner Diego Garcia created a menu centered entirely around seafood after stints at Le Berardin and Contra awakened the duo to the common dietary practice of pescetarianism. "There are a lot of fish restaurants that do use a lot of meat like pork butt and chicken stock in their sauces...we really looked around and there isn't a fish restaurant that's 100% fish."

The restaurant sources all of its seafood from Northeast and Atlantic purveyors, working closely with companies like Greenpoint Fish & Lobster Co. to provide sustainable fish including skate, scallop and bass to diners. "Sometimes guests have an iPhone in their pocket and they're looking at the Monteray Bay Aquarium recommendation and we can happily tell them, 'Yeah, everything we're buying is sustainable,'" according to Johnson.

Garcia's Mexican heritage influenced some of the dishes and the chef's dedication to seafood goes all the way back to childhood when he would catch octopuses and clams when he was a young boy. "It's not overtly Mexican," Johnson explains. "But once in a while there'll be some sauces that send him back to childhood." 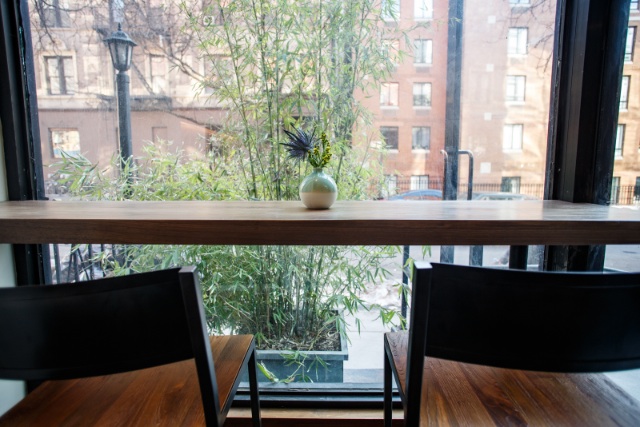 Johnson's in charge of the wine program, which currently offers 65 wines predominantly from France—with a smattering of American producers—with a bent towards natural wines, which are made with wild yeasts and little to no sulfur. "If you've only had Tropicana orange juice and then you have fresh squeezed orange juice you're like, 'Oh my god, this is orange juice!' That's how I feel about natural wine."

The partners looked at over 100 different spaces before finding their prize on West 53rd Street (enormous windows helped seal the deal). Blue leather-like material was hand-selected at a fabric store on the Lower East Side to cover the booths and banquettes, which Johnson describes as "cosy corners." He's also quite taken by a design feature that offers dinner with a view.

"There's these two awesome seats that sit side-by-side and look out the window. I love that, I think that's a super date night little corner."