On Friday evening, while strolling on the brand-new boardwalk after a three-venue feast, my companion and I somewhat wistfully recalled how, less than a decade ago, eating at Rockaway meant a bag of Bugles at the Key Food. Not anymore, obviously, and I freely admit that the great beaches out here went from being an occasional summer adventure to an every-weekend ritual in 2008 with the opening of Rockaway Taco.

As per usual these days, the opening of the 2015 beach season at Rockaway also means there are a bunch of new restaurants to enjoy after or in the middle of your day of beach-lounging, sneak-drinking, sun-burning, body-surfing summertime fun. Here's a look at the newcomers. 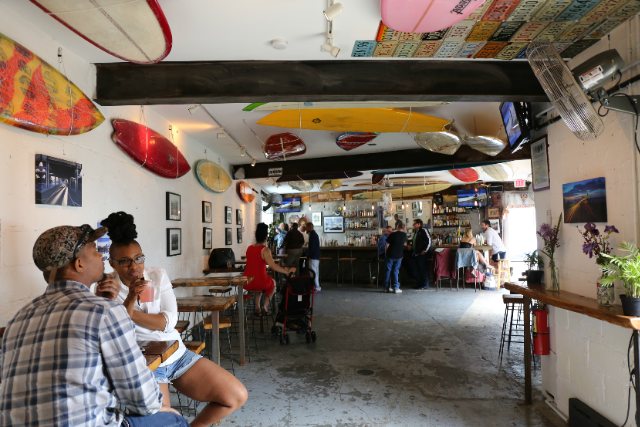 TACOWAY BEACH Beach-food tragedy was blessedly averted this year when, after the closing of Rockaway Taco was announced, chef Andrew Field found a new home just a few blocks away in a shipping container out in the festive back terrace of the Rockaway Beach Surf Club. Called Tacoway Beach, here you'll find all of Field's greatest hits—my regular is one Fish Taco with guac, one Chorizo Taco without, and both seem to have weathered the move just fine—plus a few new additions, one of which—the Esquite: a cup of warm, chewy hominy topped with spicy mayo, cojito cheese, and chili powder—was probably the best thing I ate all weekend.

And though I'll probably always miss the breezy concrete "garden" at the original space, the sprawling new digs are kind of a perfect match for Tacoway's chill vibe, and Field told me he's noticed already how much easier it all is for his customers, as they can now get some drinks and hang out in an actual place instead of a standing on a too-narrow sidewalk, while they wait to order/for their orders. 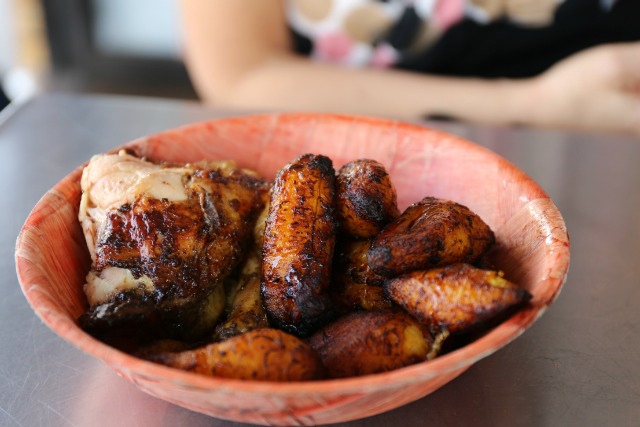 CHICKS-TO-GO Peruvian rotisserie chicken and its many imitators are not exactly rare in NYC, but not only is this new, mostly-take-out spot located just a block from the beach, it's also freaking delicious. On the menu are specials like empanadas and salchipapas—those crazy french fries with spicy hot dogs covered in cheese that are amazing even if you're not high—but the real draw here is the chicken, which you can get as a quarter, half, or whole, and is super juicy, explosively seasoned (you have to love garlic though) and, when dipped in either the pinkish hot sauce or the yellowish pepper sauce, is as tasty as Spicoli's waves. 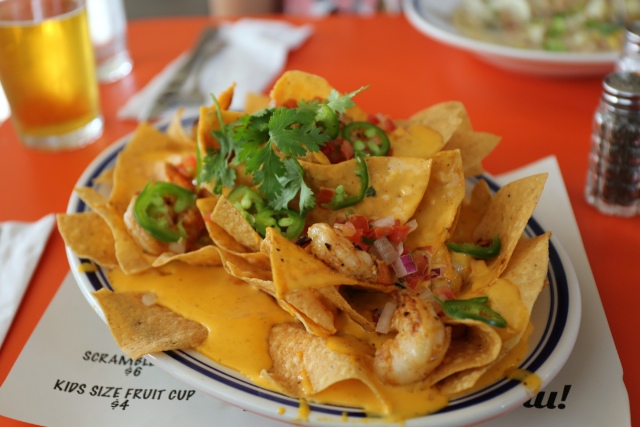 PLAYLAND GRILL Full disclosure, I never ventured inside the "old" Playland because through the windows it looked like some sort of terrible transplant from the frattier precincts of the Lower East Side. But this fully-revamped Playland Grill—with new owner Dan Cipriani and a completely different menu—is...well, maybe not exactly grown-up (on the menu you can color tattoos on an inkless Henry Rollins, for example), but less unnecessarily rowdy and definitely worth a visit.

The new Playland menu is long and filled with unsurprising beach-town choices, but if it's all as good as my bowl of hearty New England Clam Chowder (with actual clams! and corn cut right from the cob!) and swimming-in-cheese Rockaway Beach Nachos with Tequila Lime Shrimp (okay, maybe too much cheese on this, but there are worse culinary crimes), then you'll likely be satisfied ordering just about anything. 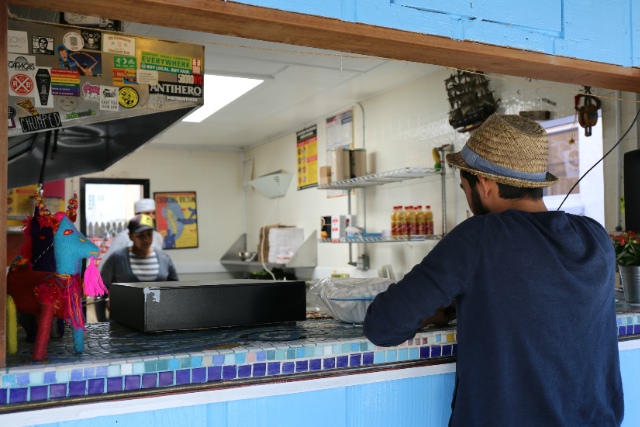 THE SUMMER SHIFT And in the old Rockaway Taco spot itself, the other former-partner David Selig is hosting a series of guest chefs conceived and implemented by The MP Shift throughout the season, each with a Latin culinary bent. First up at The Summer Shift are Leyla and Ximena Yrala and Carlos Varella, serving Peruvian and Brazilian street-food favorites like Pasteles De Carne and Queijo (these were both excellent, especially the cheese one which was, somewhat surprisingly, made with fresh mozzarella), and Páo De Queijo, those doughy, chewy cheese balls that are pretty much a must order whenever they appear on any menu.

The Pork Sandwich looked like a solid choice as well. For a sugar rush, wash whatever down with a can of Inca Cola, a Peruvian soda that tastes remarkably like bubblegum. And if the outdoor seating area looks a little bare with all those once-so-colorful benches freshly painted white, maybe things will evolve more toward a party as the season goes on. 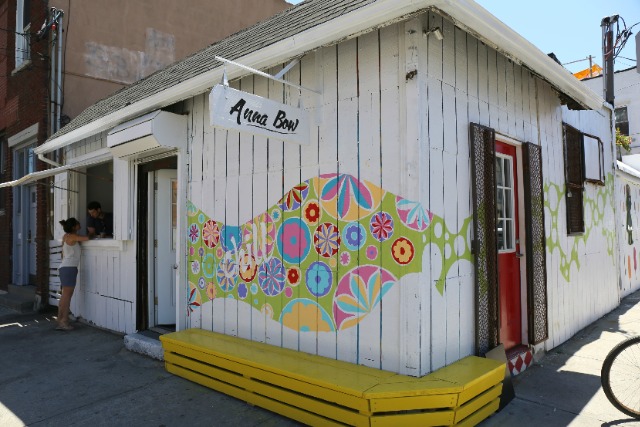 ANNA BOW In that corner spot where Veggie Island used to be (it sold coffee, Dough donuts, and random fresh produce for a while) now stands Anna Bow, a breakfast, lunch, coffee, and smoothie place from an affable young pink-haired man named Matthew Blance. Anna Bow's menu is heavy on sandwiches, grab-and-go salads, locally baked goodies, and at least one fantastic Breakfast Burrito, with eggs, beans, cheese, salsa, and smoky bacon. Like, when you wake up hungover and wish more than anything you could eat a breakfast burrito? This is the one you're craving. 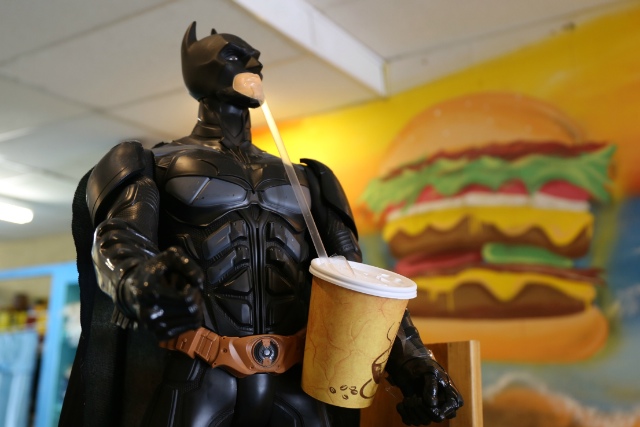 BEACH SLIDERS There's a serious Batman thing going on at the new Beach Sliders grill over on Beach 99th, as the Dark Knight makes an appearance at least five times in the tiny spot's awesomely DIY decor scheme. Lots of pro-Union and Support the Troops regalia as well. Prices are low, the crew's all Rockaway locals, and my trio of huge Sliders (one with pineapple, which worked nicely), were totally satisfying. And for $5, the order could have easily fed two. Next time I'm taking the counterman's suggestion, though, and getting the Cheese Steak. Good food, friendly folks, no gimmicks. Except all those Caped Crusaders. 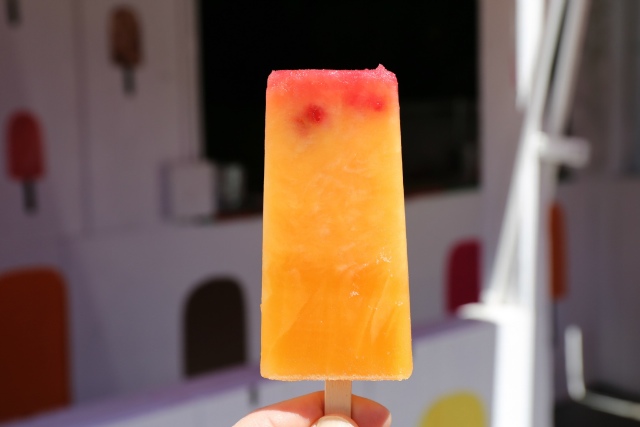 LA NEWYORKINA Also worth noting, the phenomenal Fany Gerson, better known as La Newyorkina (have you ever had her baked goods? amazing stuff), opened up a stand as part of Summer Shift, where she'll be slinging her lively and refreshing Paletas in both expected and more adventurous flavors all summer long. You definitely want one of these as you're heading back to the train. 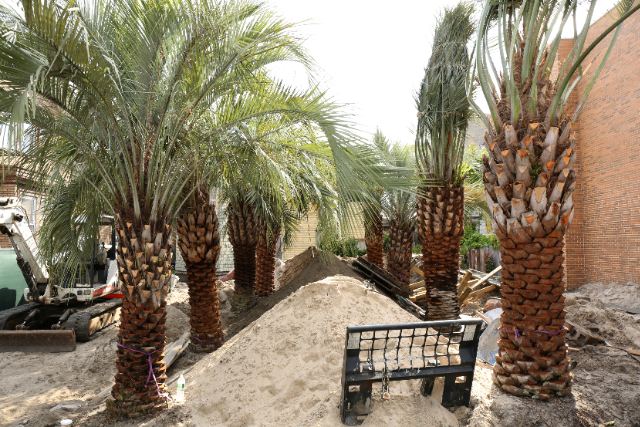 "The Palms" and the unnamed "Burger Deck" Two more openings possibly of interest, coming in the next few weeks: The Palms (not its official name), which will sell coffee and boutiquey clothing and accessories deep within the newly-sprouted palm forest on Beach 96th; and Whitney Aycock of Whit's End is putting in a beer-and-steamed-burger outdoor dining spot in what seems like a great location overlooking Jamaica Bay in Averne, just a few blocks from the good-food-wasteland of Beach 67. Expect to hear more on this one as progress is made.