It seemed like there were an unusually large number of new restaurants and concessions opening out on Rockaway last summer, and the good news is that the best of the bunch are back to feed all of our beautiful beach bodies once again. Old favorites like Tacoway Beach and Rippers—home to NYC's best fish tacos and one its best burgers, respectively—were both mobbed throughout the weekend, with the likes of Bolivian Llama Party, Playland Grill, Chicks to Go, Caracas Arepas, Breezy's Barbecue, and the essential La Newyorkina all also enjoying the return of summer customers. That said, there are a few new options by the beach this year, and a couple of things in the works. 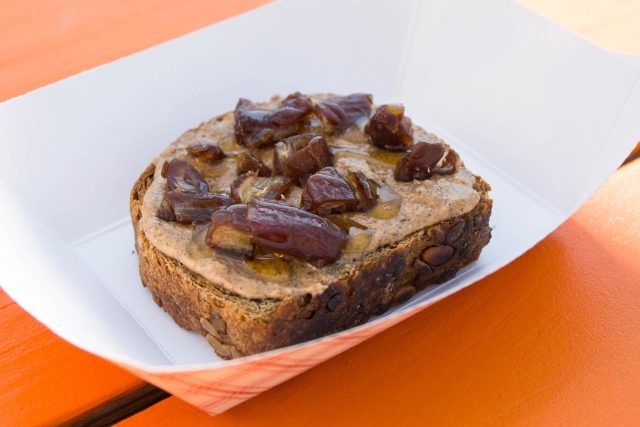 BROTHERS AT BEACH 106 Joining Caracas Arepa at the Beach 106th Street concessions is a brand-new outfit from two brothers (and Rockaway Taco alumns) called Brothers. The emphasis here is on healthy dishes using fresh ingredients like the superb, just-made bread from local baker Diwa, produce from nearby Edgemere Farms, and salad greens from the great Campo Rosso Farm who also, by the way, have one of the best booths at the Union Square Greenmarket. The menu at Brothers will change based on whatever looks best, but last Saturday, in addition to my terrific breakfast—a thick slice of delicious seedy bread slathered with almond butter, drizzled with NYC honey, and topped with dates—there was also an egg, cheddar, and ramp pesto sandwich, a kimchi grilled cheese, and a brown rice bowl. Oh, and scoops of Blue Marble ice cream. 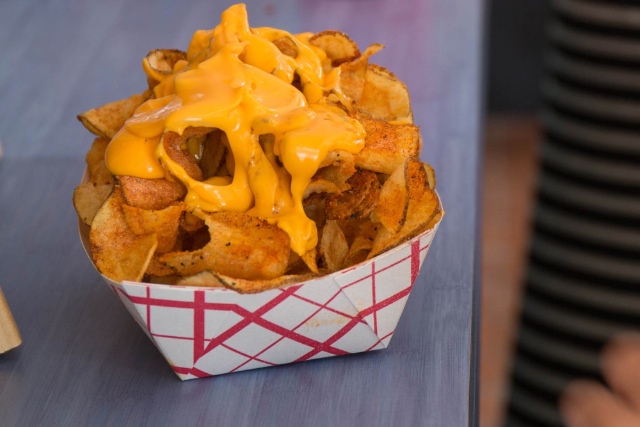 The concessions at Beach 97th Street are always popping, and this summer there's a new reason to wade into the crowds: Sharky's Grilled Cheese, which specializes in exactly that. There are a few different options here, all on potato bread—I had the cheddar-and-butter El Classico with added bacon, and it was ok—but the stealth hit is the overflowing boat of twirly Ribbons Chips, which are freshy-fried, seasoned with "secret" spices and, if you're smart, covered in nacho-like cheese. 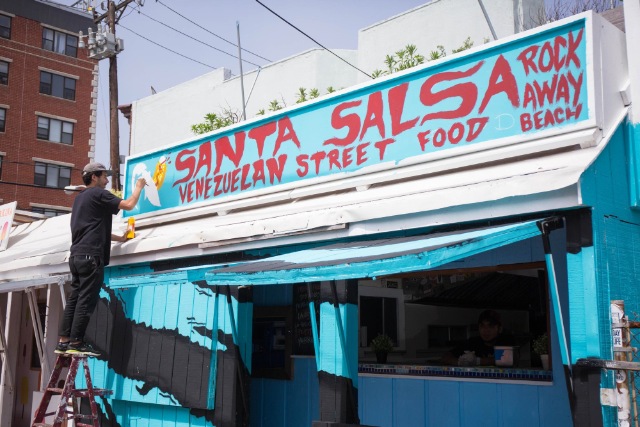 SANTA SALSA ON BEACH 96 Last year, the former home of Rockaway Taco on Beach 96th Street saw a rotating series of pop-ups, called Summer Shift, none of which really found their footing. This summer the now-iconic space with that breezy little side yard has a permanent tenant, the terrific Santa Salsa, who you may know as the dudes who flew the pirate flag from their cart on the boardwalk. The new Santa Salsa was a bit laggard in its opening times over the weekend, so I didn't get to try anything, but the appealing menu features such things as a crazy burger topped with potato chips, ham, avocado, fried egg, and more; a crazy plate of french fries smothered in three kinds of meat (streak, chicken, bacon), veggies, and housemade BBQ sauce; and a crazy mushroom burger called La Halucinogena. 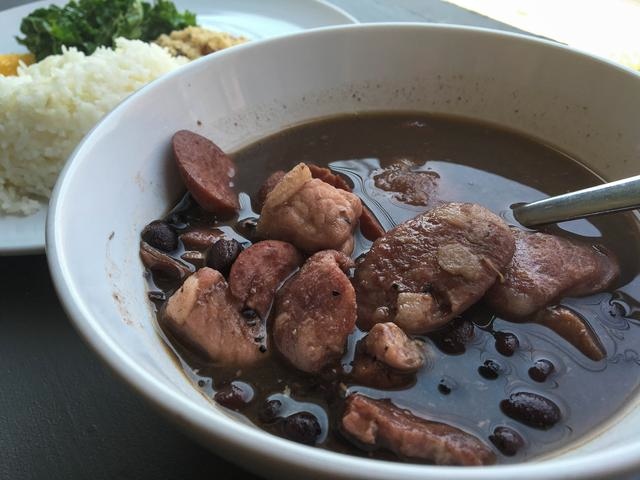 BEACH BISTRO 96 As stated recently, this all-day Brazilian cafe on the corner of Beach 96th and Rockaway Beach Boulevard is serving excellent food, especially the Feijoada, which is a stew made from about four different kinds of meat, black beans, a thick, complex broth, and, following tradition, is only available Wednesday and Saturday. Also highly recommended: the Pasteis (like empanadas), and the sweet, coconutty, Tapioca "crepe."

95-19 Rockaway Beach Boulevard, at the corner of Beach 96th Street

NEW BAKERY & SURF MUSEUM AT BEACH 96Word has it that David Selig, one of the co-founders of the original Rockaway Taco, is opening a surf museum with bakery in his Palms complex on Beach 96th Street, but nothing looked close to being ready over Memorial Day. Stay tuned. 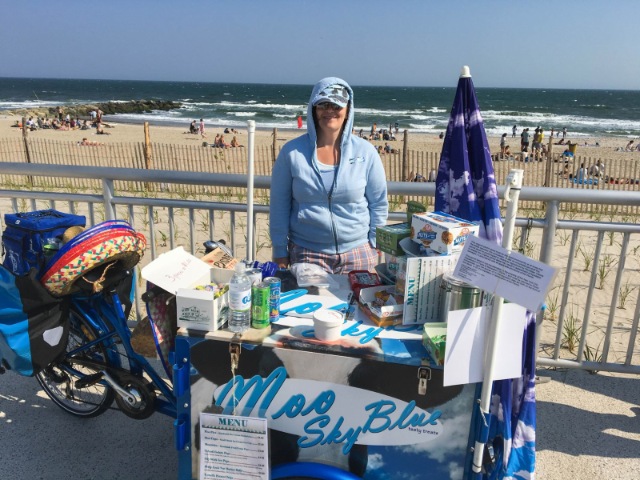 MOOSKYBLUE AT BEACH 67 Although Beach 67 long ago stopped being a secret—it's still not nearly as crowded as the areas around Beach 90 and 97, but it's not close to empty, either—and they've added a new swimming section to the traditionally surfers-only stretch, there are still no big boardwalk concession stands down this way. If you're thirsty, the By the Beach Coconut tent will sell you a $6 husk filled with coconut water shipped from Thailand, but the better move is to get whatever Arley Tapirian is hawking from her MooSkyBlue "icicle tricycle" filled with hippie snacks and terrific homemade ice cream creations. If she has the Dark Dark Chocolate variety, get it. Ok, so MooSkyBlue isn't new, but the scheduled Trop Pops cart we were all excited about didn't pass NYC inspection it seems, and so wound up in Riis Park, which is managed by the more laid-back National Park Service. 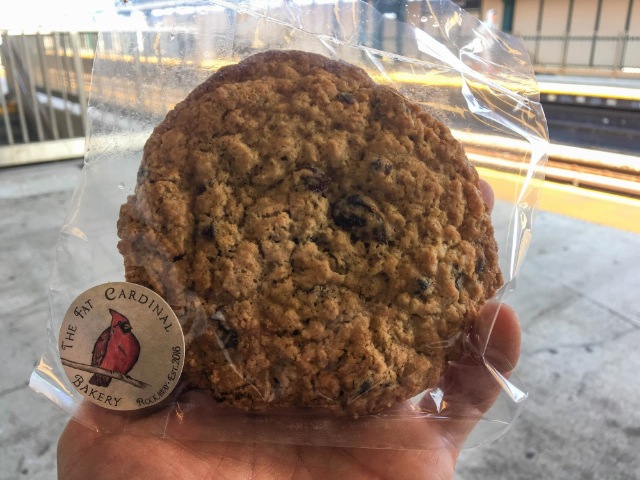 FAT CARDINAL BAKERY AT UNGLE LOUIE G ON ROCKAWAY BEACH BOULEVARD For a full-on dessert experience, the Uncle Louie G on Rockaway Beach Boulevard between Beach 96th and 97th is hosting a pop-up of sorts (it's just a table in the corner) by the guys from local cookie masters, Fat Cardinal Bakery. The cookies are good on their own—or, at least, the chewy Almond Cherry I ate while waiting for the A was good—but if you really want to go to town, you can create your own ice cream sandwich using all of the goodies at your disposal here.