All The King's Ceviche 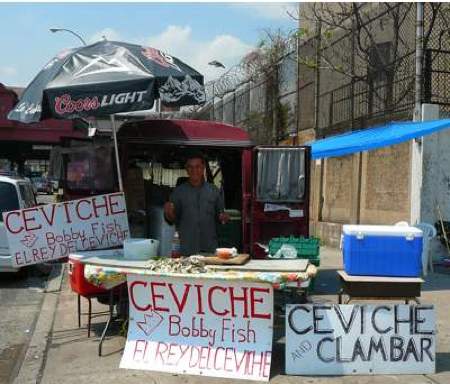 Every morning, Bobby Fish parks his busted up maroon Dodge van at the edge of a Hess Express parking lot on West 207th Street. He unloads his signs and opens his Coors Light umbrella. “Bobby Fish,” the signs proclaim, “El Rey Del Ceviche.” People call him the King- it's not just his own posterboard. The King pulls a few lawn chairs out of his van and sets them on the sidewalk. Behind him, a Harlem River breezes makes plastic bags fly through the air or snag on the barbed wire coil running the perimeter of the nearby subway yards fence. Finally, Bobby Fish sets up a folding table and cutting board; he readies his cooler near the tailgate for a day’s work. Amidst all the Tupperwared fresh neon juices carted around in bicycle baskets, kids with $1 Poland Spring waters running into traffic at stoplights, and the spiral-peeled oranges in ziploc bags claptrap is Bobby Fish with the most improbable summer street food of all: the King’s cooler is filled with clams. El Rey Del Ceviche is one of the very last raw bar street vendors in New York- $1 a piece for iced, medium sized cherrystone clams on the half shell. With minimal condiments (hot sauce, lime), a few bushels, and a perpetual smile, he manages to stay busy all day.

Clams aside, El Rey Del Ceviche has a limited menu: shrimp or "lobster tail" ceviche. Give the King $10 and he reaches into a huge, ice-filled Igloo cooler sitting in the back of his van (which also houses a makeshift prep kitchen), selecting a pint of ceviche. He rips off the lid and hands it to you, sawing up a hunk of lime for garnish, offering a squeeze of Brand X hot sauce from a squeeze bottle filled with the stuff. The shrimp and lobster ceviche are both marinated in the same mix of tomato, white onion, and peppery citrus brine, and as far as roadside ceviche goes, they’re actually pretty good. Of the two choices, you’d do better to go with the shrimp; subsequent, CSI chef lab forensics of the lobster tail ceviche revealed a healthy proportion of sea legs among some haphazard pieces of previously frozen claw and knuckle lobster meat. Back at the King’s de facto Inwood headquarters, we go for the obvious, and ask him how he got his name. “I’ve been doing this for 25 years,” he says. He holds a clam knife in one hand, brandishes a butcher’s cimiter in the other, and poses for a picture. “But,” he adds, “really we are all king. Everyone is king.”