Monday is National Peanut Butter Day, and we're going to celebrate the fluffernutter out of it. To do that, we must be prepared. Let's do this, New York.

PB&J 101
Food historians believe the sandwich was created during World War II, as there's no mention of it prior to 1940s. Apparently GI's were given rations of both peanut butter and jelly, and ended up mixing them together for a fresh new treat. When they returned to the State, sales of peanut butter and jelly skyrocketed. Shockingly, it took over two decades for someone to think of combining the two in a single product. Naturally, that someone was the J.M. Smucker Co., who in 1968 released Goober, a jar containing both PB and J.

IN NEW YORK CITY
In 1941 it was already appearing on menus—like the LaGuardia Airport Coffee Shop, where it sold for just 15 cents (over at the Beverly Hills Hotel it was a whopping 35 cents.) Check out the menu at the NYPL.

ADDITIONS
If you aren't a purist, there are options to advance your PB&J beyond the core ingredients. Some people add honey, Nutella, bananas, marshmallow fluff, potato chips, and even maple syrup. While some prefer raisins (disgusting), or bacon (duh). 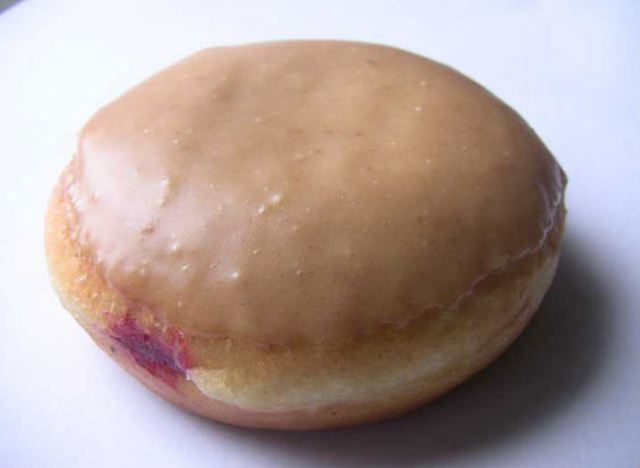 The PB&J at Dun-well Doughnuts

WHERE TO EAT THEM TODAY
Now that you know mostly everything there is to know about the sweet and savory sandwich, here's where you can indulge around NYC...

Now, can someone please make a ramp jelly so we can properly celebrate this holiday?

#national pbj day
#pb&j
#peanut butter and jelly
#sandwich
Do you know the scoop? Comment below or Send us a Tip