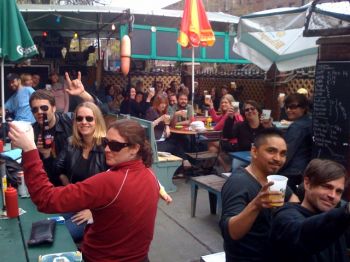 Gowanus Yacht Club is known for its simplicity, so we suppose that answering our questions with such brevity is just owner Alan Harding's way of keeping things consistent.

The beloved Brooklyn hang only opens during the sunshine months, and this past weekend it unlocked its gate to the beer drinking, hot dog eating masses.

How did the bar become named Gowanus Yacht Club? The canal is two blocks away and needs all the help it can get.

How was opening night this year? It was great, the toilet didn't break.

Will there be any changes this season? Trivia, bingo and free yoga on Sundays, namaste.

What's the most ordered food item, and most popular beer? Hot dogs by far, cooked in Sweet Action by Six Point.

What's the best part about working at GYC? The people....it's all about the people.

Please regale us with one of your worst customer stories. In general it would have to be the annoying habit that people have of carrying most of their worldly belongings in a valise or some sort of suitcase.

What's the current GYC soundtrack? Right now its the radio; I like Hal Jackson on Sunday morning.

Given the opportunity, how would you change New York? Less government, more farmers markets.

Under what circumstance have you thought about leaving New York? Anthrax or a dirty bomb.

Which New Yorker do you most admire? Brent, the carpenter who works for beer.

Can you please recommend a good weekend hang-out that isn't unbearably mobbed? Coffey St. Pier, or any Catholic church.

What's the best subway line? The F train unless you are Vong the cook...R.I.P. buddy.

Best cheap eat in the city? Right here baby, unless you want to go freegan.