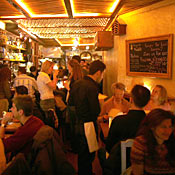 The PR team over at Mercadito sent us a very disturbing email earlier today:

On Sunday, August 26, at 7:20 am Antonio Barranco Hernandez was killed, and Luis Romero and Augusto Bravo were seriously injured after a drunk driver slammed into the back of the van while the men delivered produce to Mercadito Grove restaurant, located at 100 Seventh Avenue South in New York City.

Mercadito has set up a fund to accept donations on behalf of the victims and their families. We are asking for you to help to spread the word.

Hernandez had been filling in for his son's shift when he was killed. Bravo was pinned between two cars and his leg was nearly severed. Witnesses think that the car was traveling at 50 MPH; the driver was charged with vehicular manslaughter, DWI, and vehicular assault.