Back for its second year, The Meadows Music and Arts Festival will be bringing Jay-Z, Gorillaz, Red Hot Chili Peppers and more to the parking lot outside of Citi Field on September 15th - 17th. Also returning to the asphalt: a special food section dedicated to Queens in addition to mainstays of the festival circuit like Roberta's, Arancini Bros, Luke's Lobster and Wowfulls. Meadows once again asked Queens-based blogger Joe DiStefano to curate the lineup for their "Feastival Of Queens."

"It would be easy to say these are all places that I love," DiStefano says of his selection process. "The goal was to represent The World's Borough as best we could." That means a range of different global cuisines and, for year two, finding more balance. The Feastival will offer an expanded menu of vegetarian eats this time around, along with more "snack-y" stuff that's easier to eat on-the-go.

Gothamist tagged along with DiStefano on Wednesday to tour some of the restaurants that will be participating in this year's Feast; here's what we ate and what you can expect from the festival's borough-based food lineup. 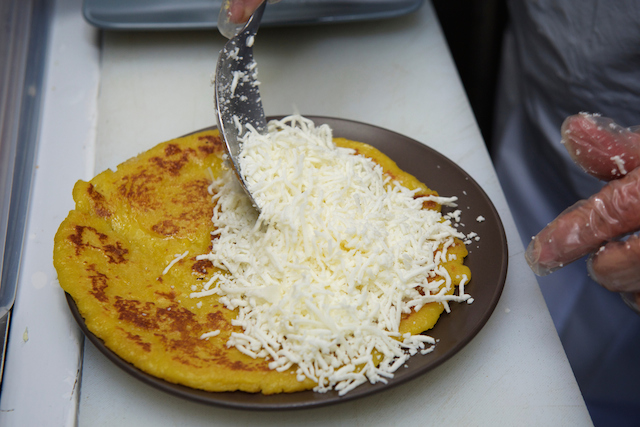 AREPA LADY "The crown jewel of Colombian street food in Queens," according to DiStefano. Maria Cano, a former lawyer and judge in her native Colombia, began her business in 1990, serving late-night club goers underneath the tracks of the 7 train near the 82nd street stop. As of 2014, she had a permanent storefront in Jackson Heights, where we met DiStefano to chow down on Chócolo (ground fresh corn griddled and stuffed with cheese) and Arepas (cornmeal cakes topped with cheese). Arepa Lady is back for her second term at the Meadows, where she'll be serving Chócolo with cheese and Arepa de Queso. 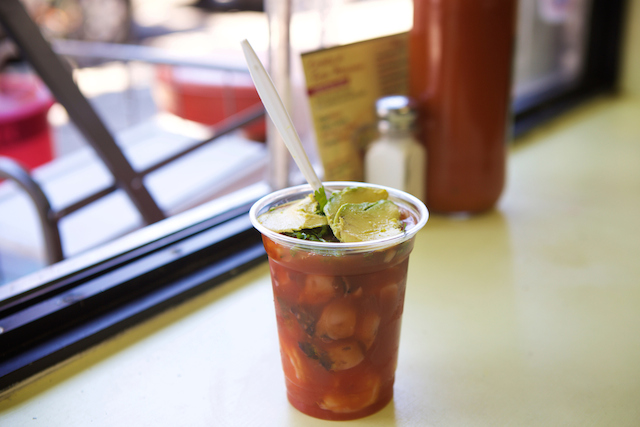 LA ESQUINA DEL CAMARÓN MEXICANO Our next stop brought us to what looked like a bodega just a few blocks away from Arepa Lady. In the back—or around the corner on 80th Street—is where you'll find Pedro Rodriguez, or one of his employees, assembling plump shrimp and chunks of octopus with salt, fresh lime juice, olive oil, clam juice and a "secret" red liquid dispensed from an unmarked jug. "The sweetness is from OJ," DiStefano admits. Rodriguez began his business outside a bodega in Elmhurst before moving to Jackson Heights. On weekends, you can still find him setting up shop on the sidewalk, topping the red cups of liquid and seafood with spoonfuls of fresh avocado. He'll be serving the Cocteles de Pulpo y Camarón.

TORTAS NEZA Unfortunately, Galdino Molinero's sandwich shop that operates out of a window inside the Juan Bar Restaurant wasn't open when we swung by but the tortas are legendary in Corona. "I would love to have Tortas Neza prepare his gargantuan signature Mexican sandwiches at the festival but that might be a bit much to handle," DiStefano says. "So he's making some lovely carnitas tacos. Plus his truck will be there which is super fun." 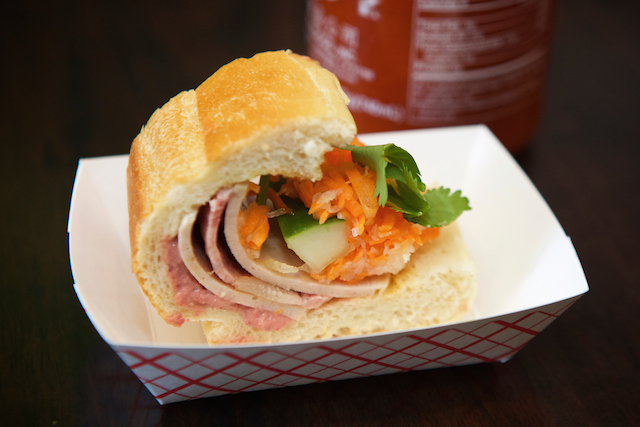 The Classic at JoJu (Clay Williams/Gothamist)

JOJU This is the "first really good Vietnamese sandwich in Queens" for DiStefano's money, noting that now there are many places to score banh mi in the Elmhurst neighborhood where Joju is located. The restaurant, which bills itself as a "Modern Vietnamese Sandwich Shop," started with just a few sandwiches and then began experimenting, using things like Peruvian green sauce to distinguish their sandwiches from other Vietnamese sandwich shops. Owners Julie and Scott Wong will be bringing their Vietnamese ham, headcheese and pâté sandwiches to the festival. 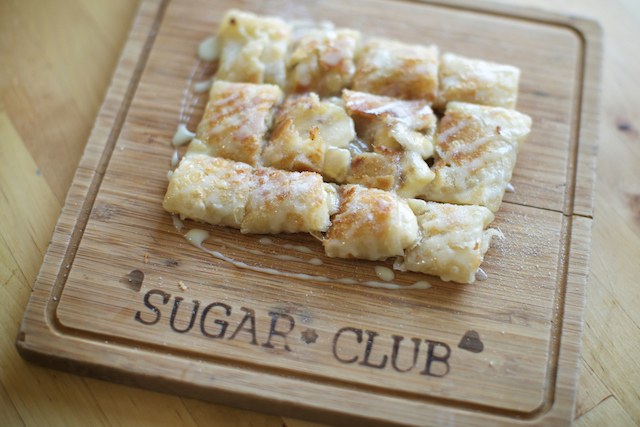 SUGAR CLUB Sugar Club is a neighborhood mainstay, first opening in 1989 a few blocks away from JoJu in Elmhurst. It's a cafe, but it's also a grocery store—stocking things like Thai snacks, condiments and ingredients like salted crab—and community center, where locals post ads looking for roommates or letting neighbors know about events. Owner Chirawat Withanwattana also knows what the people really want: beautiful, colorful and flavorful desserts like Banana Roti and the cafe's well-known toasts. The Roti and the Honey Toast—loaded with butter and grilled—will be at the fest; see the top photo of this gallery for a stunning example. 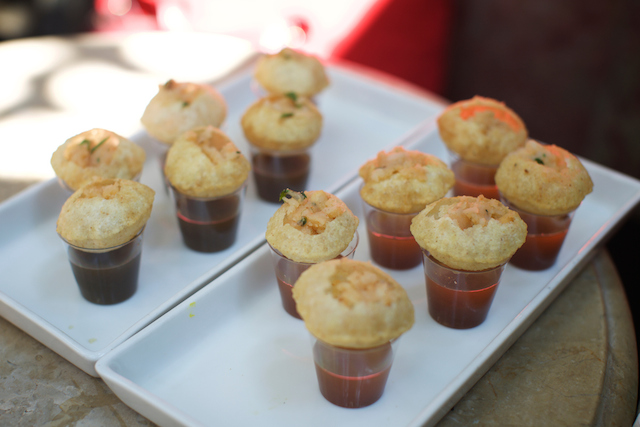 KURRY QULTURE Chef Binder Saini grew up eating pani puri in the Punjab state in India and now he's bringing the street food to the people of Astoria (and Meadows attendees). The hollow semolina puffs are filled with a mixture of cooked potatoes and chickpeas in bite-sized portions. Each puri is served with a shot glass of either a tamarind or a chili-lime-mint liquid, which is poured into the shell. The entire thing is popped into your mouth, where the liquid bursts out while the shell remains crunchy. 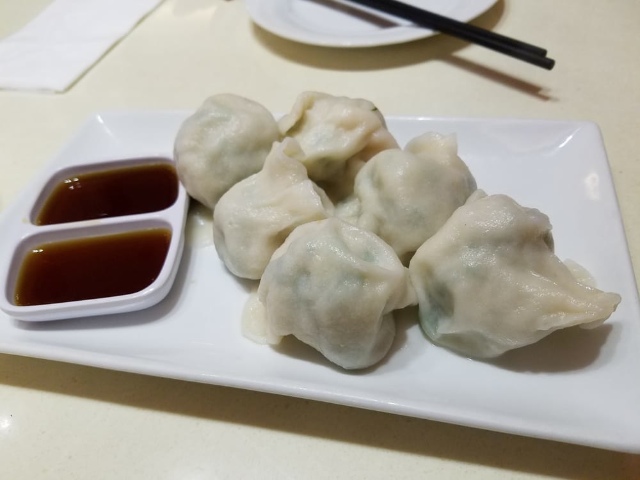 DUMPLING GALAXY We didn't make it out to Flushing to sample dumplings, sadly, but festival attendees will be more lucky. "Helen You's Dumpling Galaxy is a classic Queens success story. I have been eating her dumplings since she had started with a humble hawker stand at Golden Shopping Mall," says DiStefano. "I'm so excited to have her dumplings representing China at the Feastival."