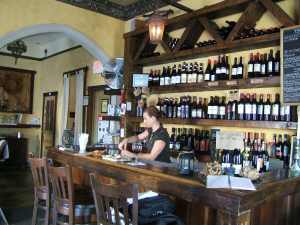 On the edge of Middle Village sits Uvarara Vineria and Ristoro, a charming family-owned wine bar that looks and feels like it should be in the middle of an Italian village instead of Queens. This is due to the efforts of the Iadicicco's who spent nine months converting what had been a tailor shop with dowdy green walls into a cozy space with exposed brick and a dining area whose four rooms each have a different ceiling. Thankfully they did not have to do much work on the exterior. The building itself has many of the architectural elements of nearby St. John's cemetery. Ask about the renovation and in short order, you'll be shown a photo album that chronicles the family's labor of love.

There's a good reason the food here seems like it's put together under the watchful eye of an Italian grandmother. Angela Iadicicco is in charge of the kitchen. Uvarara's menu is divided into several categories, including Tagliere, or cured meats and cheeses and piattini, literally small plates. They may be small, but they're packed with flavor and surprises. Order the fried pizzette stuffed with onions, anchovies and olives and what you'll be presented with is not a disk of dough, but a golden brown orb. It's like a savory zeppole. 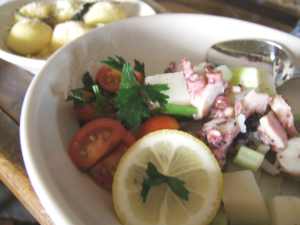 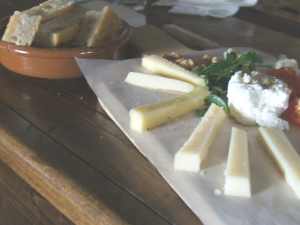 Each of the six insalate on the menu are named for Italian painters. Polpo Caravaggio is a bowl of impossibly tender octopus shot through with celery and potatoes. Gnocci alla Romana fall squarely into the melt in your mouth category. These little orbs of semolina-based cheesy splendor are so good you may want to get two orders rather than share with your date. Since it is a wine bar, how can one not order a cheese plate. The Orozio is a more than ample serving of gorgonzola, caprino, Parmigiano, Bel Paese and piave. As you smear the rustic goat-milk caprino on crusty well-salted focaccia and take a sip of vino, you'll find it hard to believe you're Queens, or America, for that matter.