Located on a stretch of Metropolitan Avenue in Forest Hills better known for antique stores and Eddie's Sweet Shop, a turn-of-the-century soda fountain, is Ran, a small storefront that offers some of the best sushi in Queens. Gothamist isn't sure if the name comes from the Kurosawa flick whose title has been translated to mean chaos or wretchedness, but there's nothing wretched or chaotic here. It's all about impeccably fresh fish expertly prepared. Last week, we sampled some sushi and some hot food from this seven-month old spot. 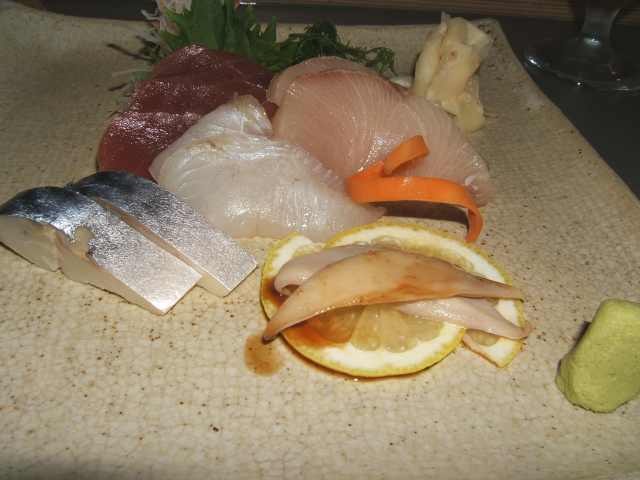 The meal started with a selection of sashimi turned out by Kido, the affable sushi chef, who asked numerous times whether his food was good enough to warrant an unexpected photo shoot. Clockwise from bottom left are: mackerel, fluke, tuna, yellowtail and squid fins. Some might find the firm-fleshed pickled mackerel to be an acquired taste due its strong flavor, but we thoroughly enjoyed it. The flavors of the fluke, tuna and yellowtail were further enhanced by expert knifework. There's nothing worse than a good piece of fish that's been clumsily cut into huge chunks or otherwise mangled. Even though this was sashimi, there was one cooked item: the squid fins. The tasty duo was brushed lightly with a sweet sauce. If you're wondering what the heck squid fin is, you're not alone. When asked the Japanese name for this item, Kido told us ika no mimi. Thanks to our limited Japanese, Gothamist knew this meant squid ears. Our portion was eaten silence, lest the squid's ancestors hear us and haunt our dreams later that night. 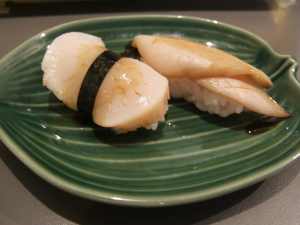 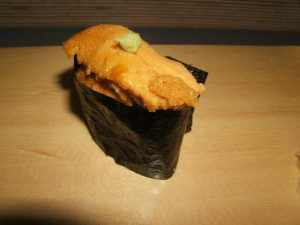 Now that our appetite was whetted by the sashimi we moved onto sushi. Gothamist had a piece of tender scallop as well as some of the aforementioned squid ears. Since we never heard of steamed uni, we just had to try a piece. Cooking rendered the sea urchin creamier and tempered its oceanic flavor. We also had two pieces of buttery fluke served with shiso leaf, which made for a bright counterpoint with the fish. 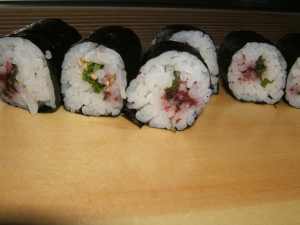 By now we were a bit full and felt like laying off the fish and shifting gears. Kido suggested a roll of ume paste and shiso. The pairing of the salty pickled plum and minty herb was quite the palate cleanser. Despite the rice, it was surprisingly light after eating all that protein.

Even though we couldn't possibly consume any more fish, something about the description of umani compelled us to order it. Most likely it was the fact that the chunks of yellowtail, fluke and tuna are simmered for several days resulting in a hearty slightly sweet concoction that packs plenty of umami into a small bowl. We were told that this dish is typically featured in Ran's lunchtime bento boxes, but many customers request it for dinner. Gothamist took home about half of the serving to make our own bento the next day.The one downside about Ran is its lack of a liquor license. It's bring your own sake, at least for now.

#a taste of
#food
#forest hills
#gothamist
#In the 'Hood
#metropolitan avenue
#queens
#restaurants
#sushi
#Sweet Shop
Do you know the scoop? Comment below or Send us a Tip