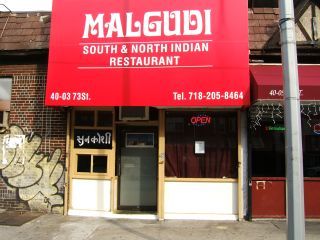 Gastronauts seeking Indian fare have rocketed along the 7 line to 74 St./Roosevelt Ave. for a decade or more. Sadly many Jackson Heights stars, including the Jackson Diner, have long faded. Even when one finds tasty grub it still seems like eating from a vast steam table. Nevertheless, we hold out hope and were glad to happen upon Malgudi.

The tiny spot's red awning announced “South & North Indian Restaurant.” Even before a menu hit the table, we knew this place wasn’t quite Indian. Perhaps the stunning posters of Nepal’s soaring Annapurna range tipped us off. When questioned about the provenance of his cuisine, the proprietor gladly explained the mostly Nepali list of appetizers. 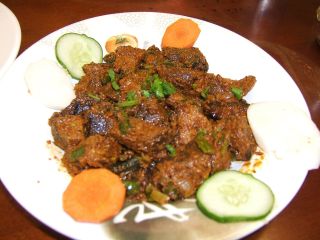 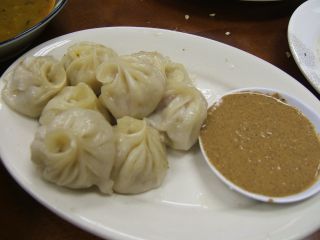 First up was choila chiura (buff), small reddish chunks of buffalo that had been grilled and subsequently coated with a fiery mix of spices. Served cold with a platter of "beaten rice," crunchy, nutty grains that were more toasted than beaten, the buff stuff struck us as a protein-packed Nepali trail mix. Since momos are one of the Himalaya's most well-known dishes, we ordered up a plate. We chose the pork variety, which were nothing stellar. The appeal of these dumplings has always proved elusive, but seeing two dudes greedily down an order each, made us wonder what we're missing.

When we asked about bhutan chiura, listed on the menu as goat with beaten rice, we were presented with a list of kidney, lungs and sundry guts that would make Fergus Henderson proud. Since we don't find offal at all off-putting, we ordered up a plate. Sadly the best thing was the rice. Next time a craving for nasty goat bits arises, we'll head to a nearby Mexican joint. We also partook of chicken curry Nepali style, which was more of a soup. The broth was abob with tomato, onion and tender bits of poultry, and had a gradually building chili heat.

Now that we've tried some of Malgudi's Nepali dishes, we're eager to taste the chicken and goat curries, as well the dosas. They may well prove to be a change of pace from the neighborhood's other offerings.

#a taste of
#fare
#food
#heights
#jackson heights
#restaurant
#roosevelt ave.
Do you know the scoop? Comment below or Send us a Tip