Roosevelt Avenue in the high 50s is better known for its Irish bars, particularly Donovan's Pub and its legendary cheeseburger, than it is for Filipino fare. That's not to say that Woodside doesn't have any Filipino restaurants, it's just that most of them are confined to Little Manila, a strip of Roosevelt between 69th and 71st streets. Now all that's changed thanks to Engeline's Restaurant & Bakeshop, which opened just down the block from Donovan's this spring. 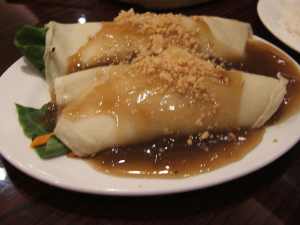 The other night Gothamist decided to stop in. At first it was difficult to find as we walked along with the 7 train roaring overhead. Once we saw Donovan's, we knew we'd walked too far. After an about-face, the name Engeline's stared us in the face in glowing vertical red letters and we headed over to 58th St.

There are no cheeseburgers at Engeline's, but there is plenty of other wonderful comfort food to be had. Take lumpiang sariwa, a pair of gigantic crepes, awash in a gloppy, yet good, peanut sauce. Unlike some of the other dishes we had during a late-night feed, this one was purely vegetarian. Filled with slivers of celery, carrot, jicama, minced garlic, and other unidentified green goodies this app was a wise choice given the porcine onslaught that was to come. 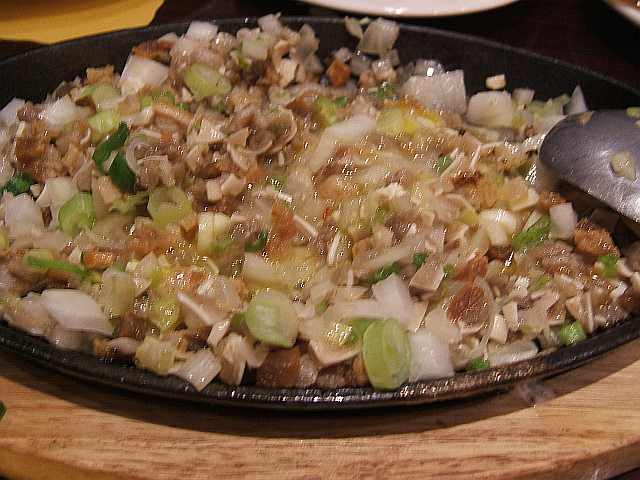 Another item that clearly falls under the comfort food umbrella is an appetizer of sizzling sisig. The menu describes it as "finely chopped pork belly, marinated with lemon and hot pepper." Our sisig came to the table on a screaming hot cast-iron platter topped with a raw egg and a large shovel-like implement to mix everything. Soon all the pieces of scallions, onions and fried pork belly were interspersed with cooked egg and we spooned the whole concoction over our rice, and added few splashes of Tabasco. The whole effect was a more tart, funkier version of hash. It struck us as something a Filipino truck driver might have for breakfast after a hard night of drinking. Sisig takes its name from the Kampangan people's penchant for snacking on sour fruits like tamarind. These days sisig consists of a sour component and a protein like pork, tofu or chorizo. In addition to small crispy chunks of pork belly our sisig had a bonus ingredient: pig ears. The white slivers alternated between crunchy and chewy, providing a pleasing textural contrast to the fattier belly. For some reason the mere mention of pig ears provoked a homicidal reaction in our dining companion who'd been devouring the dish only 10 minutes earlier. 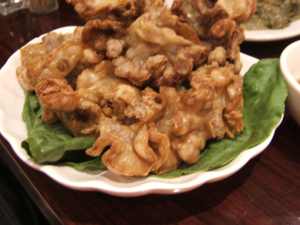 Continuing with theme of pork parts of questionable provenance, Gothamist gleefully dug into the chicharon bulaklak, or "crispy ruffle fat." The accompanying soy-vinegar sauce complemented the funky corrugated pieces of pork perfectly. Unlike plain old boring chicharon, bulaklak has more surface area due to the ruffles, and in turn more crispy goodness. If the pig ears haven't put you off yet, you'll want to know why bulaklak is ruffled. Here goes: bulaklak is the part of the beast known as the great omentum, a fat-filled sac that covers the small intestines. Now that Gothamist has eaten this dish, there's no turning back. We intend to keep up the momentum and try fried chitterlings in the near future.

As we were eating our meal, a few of the cooks gathered around and not just because we were the only customers left in the joint. Clearly impressed by our lusty appetite for pig offal one guy asked whether we'd ever been to the Philippines. When we said no, he proceeded to inform us that it's a country in Asia. Thankfully his next lesson was much more enlightening. 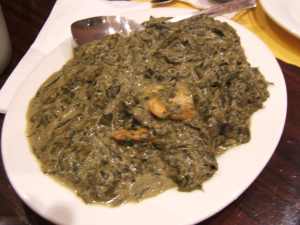 The order of laing you see here might look like a saag paneer that belongs in a Jackson Heights buffet, but it's actually a delicacy of Legazpi City, as our friendly teacher informed us. Laing consists of sun-dried taro leaves that have been simmered with coconut milk and a few shrimp for good measure. Despite the dish's muddy looking appearance we couldn't stop spooning it over our rice, mainly because the taro leaves had a beguiling flavor that lay somewhere between artichokes and jackfruit.

We are already plotting a strategy for a next visit to Engeline's. It involves bringing a whole gang of people ordering some noodle dishes and seeing if we can convince them to roast a pig.

It would be a sin of omission not to mention that all of the items in the bakery case look quite tempting. Gothamist has been noshing on a macapuno tart while writing this dispatch. The dense golden cupcake was packed with plenty of sweet young coconut and had the rich flavor of a Chinese egg custard tart. It's a good thing we had the foresight to buy another for tomorrow's breakfast.

#a taste of
#bars
#fare
#food
#gothamist
#In the 'Hood
#once
#restaurant
#restaurants
#roosevelt avenue
#train
Do you know the scoop? Comment below or Send us a Tip