A Taste of ... Clippers Cuisine 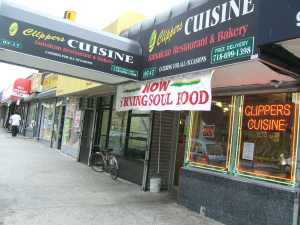 Clippers Cuisine in Lefrak City has all the things one associates with a great Jamaican restaurant: killer oxtail, patties and coco bread, such traditional breakfasts as ackee and salt cod and the requisite easygoing dancehall reggae soundtrack. It also has one another claim to fame. The menu cites it as Naomi Campbell's favorite Jamaican restaurant. At first we were skeptical about that claim, but a quick check of W Magazine proved its veracity. The other interesting thing about Clippers' menu is a dish called Rasta Pasta. With a name like that, we simply couldn't resist ordering it. Much to our disappointment, Clippers was out of it the day we visited, but we did learn from the gal behind the counter that this vegetarian dish has "very special sauce." 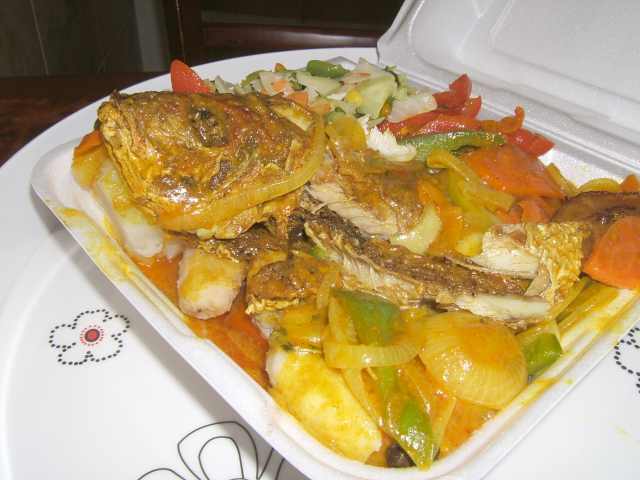 As we pondered what to eat instead of Rasta Pasta, we noticed a somewhat incongruous decor element, a sushi clock, which put us in the mood for fish. So we ordered up red snapper with curry sauce "hard down," or that is to say fried and then mixed with the curry as opposed to stewed in it. For a side we chose ground provision, which is exactly what it sounds like, a provision from the ground, i.e. a yamlike tuber. For some ungodly reason we scarfed down a fried dumpling and a codfish fritter while waiting for what turned out to be enough grub to feed Naomi Campbell and half her entourage. As you can see, the fish came with a ton of veggies, the aforementioned ground provision, bananas, plantains and dense pucklike dumplings, which did a fine job of mopping up the peppery curry. About that curry, in addition to quite a bit of heat, it was also quite aromatic thanks to a few whole juniper berries scattered throughout. All in all, it was a fine and filling meal, but we're still looking forward to trying that Rasta Pasta.

#a taste of
#city
#clippers
#food
#naomi campbell
#restaurants
Do you know the scoop? Comment below or Send us a Tip
A new Gothamist is coming! We’ve moved comments over to our beta site. Click here to join the conversation and get a preview of our new website.