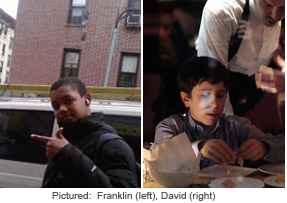 Maybe you saw yesterday's Times article about the precocious Upper West Side foodie who took himself to Salumeria Rosi one night last week after his parents called to say they wouldn't make it home for dinner? And when David Fishman, age 12, got home, he wrote a little Zagat-esque review in his "leather-bound notebook"? His verdict: "As I left, I knew that soon enough this would be one of the most ‘hip’ places in the city."

Oh, surely you'll agree it was a such an adorable story, as these manufactured lifestyle pieces go—it's the #2 most emailed and counting!—so it would be churlish to speculate as to just how columnist Susan Dominus found her little Max Fisher in the first place. (Though a Google search of "Susan Dominus friends Fishman parents Upper West Side" yielded this 2002 Dominus article in NY Mag with a quote from one UWS mom named Iris Fishman—not that there's anything wrong with returning to the same well twice, if that's the case.)

Anyway, David Fishman is yesterday's news. Meet our new favorite pint-size food writer, Franklin, a Bronx pre-teen who last year became the official cafeteria critic at his middle school, CIS 339. His column, called “Franklin on Food,” ran as part of the school’s online newspaper, the indispensable 339 Hardline. Franklin's beat may not have covered the 'most hip places' in town, but it was distinguished by a stylistic brio that makes him sort of the Robert Sietsema to David Fishman's Danyelle Freeman.

Not a fan of the cafeteria coleslaw, Franklin once riffed: "Shout out to the garbage for eating all the coleslaw." Another reason why Franklin's the man? He refused to dumb down his reviews with such vulgar quantifiers as ratings:"Thank you for cooking today, dining staff. If I was going to rate you, you would have gotten a 9 out of 10. But I’m not a rater." And he wasn't afraid to get contemplative, either: "Another day, another cold lunch for 808 (cry)(cry). Detention continues. If the three people that took the bean-baby confess, we won't have to take the cool lunch again. Would it be cool if we had sea food in school? That is my only question. OK, I lied to you. I have another question. Do you like Pizza? I don't any more because I've had it so much in my life...Don't forget, fat people rock." [Via Gotham Schools.]