By
Jade A. Williams

By
Jade A. Williams

Last night I attended the unveiling of Ben & Jerry’s new celebrity flavor, “Scotchy Scotch Scotch,” at Pier 36. Ben & Jerry’s created the new flavor and partnered with Paramount Pictures to name it in honor of the Legendary Ron Burgundy. The flavor is a nod to Burgundy’s love of all things scotch and appears in advance of the sequel, Anchorman 2: The Legend Continues, which hits theaters on December 20th. (Check out the new trailers here.)

The night kicked off with an incredible performance by Nutty The Waterskiing Squirrel. Nutty, who appeared briefly in the first Anchorman film, did laps around a 24-foot pool filled with six inches of water. The squirrel is actually portrayed by two waterskiing squirrels named Twiggy #7 and Twiggy #8. More on Twiggy and her loose bladder later. 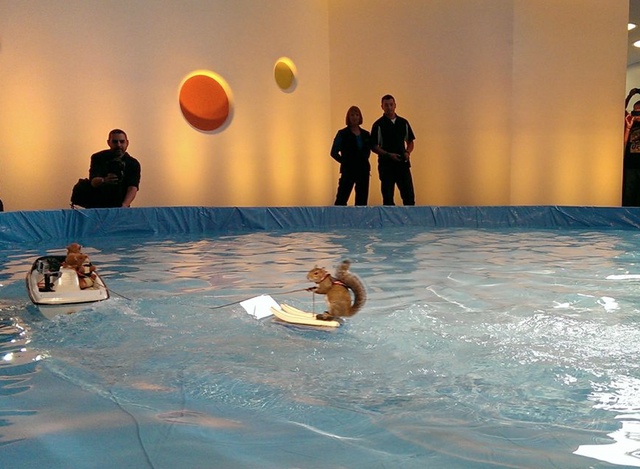 All that water makes it hard for a squirrel to hold it in. (Jade A. Williams)

Following Nutty’s performance, a Ben & Jerry’s scoop-truck-turned-Channel 4 News-truck rolled onto the scene. Out hopped a troupe of mustachioed Ron Burgundy look-alikes. After they disembarked, the flavor was officially unveiled and the Burgundys handed out what seemed like endless samples of the ice cream.

Ron Burgundy’s Scotchy Scotch Scotch is a butterscotch ice cream with ribbons of crunchy butterscotch candy swirled in. “It tastes like the Butterscotch you remember as a kid,” says Eric Fredette, who has served as Ben & Jerry's Flavor Guru (yes that's his actual job title) for 18 years. What you may not remember from childhood is topping your ice cream off with actual scotch. For those who requested it, bartenders served up spiked scoops of the ice cream, topped with The Glenlivet Scotch. It was magnificent. 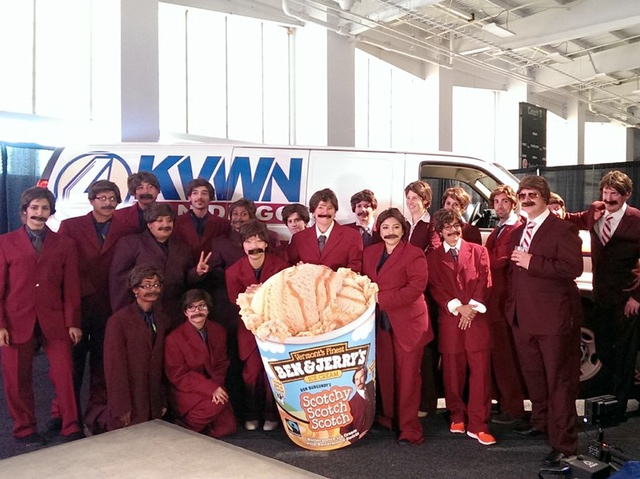 Scotchy Scotch Scotch is available now at participating Ben & Jerry’s scoop shops, and pints of the ice cream will be arriving in stores over the next few weeks. The limited batch will only be available through April 2014.

After we tasted the ice cream, we got to see a second performance by Nutty/Twiggy. Her trainer and owner, Lou Ann Best, has been training squirrels to water ski for 35 years. “We got the first Twiggy in 1978 after a rainstorm,” Best said. After buying their daughter a remote control boat for her birthday, Best’s husband taught their first squirrel how to water ski on it. Sadly, her husband died in a boating accident in 1997. Since the accident, Best has been traveling the world with Twiggy to promote water safety and boat safety. 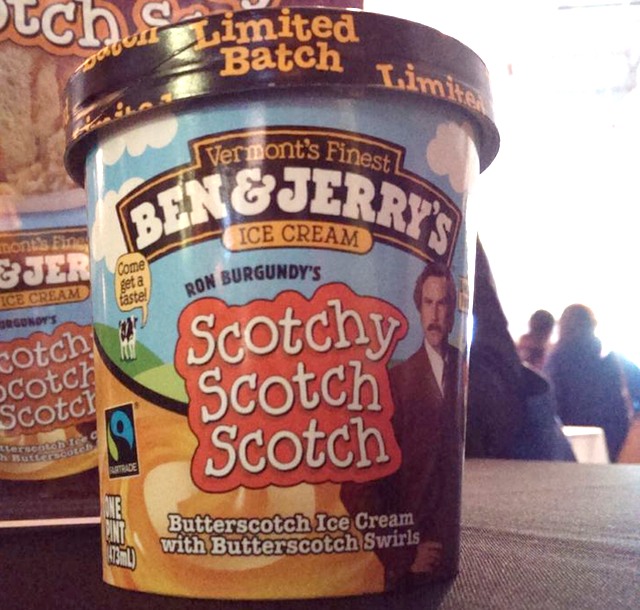 At the end of the night, Twiggy and her trainer signed autographs and let people take photos with the squirrel. Being the fearless, daring animal lover that I am, I asked to hold Twiggy. The talented squirrel was passed to me, and I held the then soft, seemingly harmless creature in my hands.

“Go ahead and let her run up your shoulder,” Lou Ann said. Twiggy took the liberty of climbing my head. There she urinated into my hair.

Thankfully, Lou Ann quickly removed the incontinent rodent from my head, while staff members gave me an abundance of paper towels and directed me to the bathroom. I left soon after, commuting nearly two hours back home with squirrel urine on my scalp. I think I deserve a raise. [Editor's note: I don't know, I feel like a little squirrel pee in your hair is a fair trade-off for free ice cream and scotch. I've certainly gone through worse for the sake of an open bar. You don't want to know.]