Even knowing that it's several cups worth of sugar masquerading as a breakfast food, it's difficult to resist the siren's call of cereals like Frosted Flakes, Cinnamon Toast Crunch and the other mascot-hawked treats we grew up eating. Fashion and footwear retailer KITH NYC are cleverly manipulating our weak wills with a new cereal "bar" opening at their new Brooklyn shop tomorrow a block from the Barclays Center. If you can't sate a craving for artificially-flavored death crystals from a branded sneaker shop in Prospect Heights then what the hell are we even doing here?

"Kith Treats" will operate a cereal bar inside the store's 3,000-square-foot new shop, which also sells $590 shoes and $990 jackets (currently sold out). They'll offer 24 different flavors of cereal—from Cocoa Puffs and Lucky Charms to more sanctimonious selections like Smart Start and Wheaties—25 different "toppings" (think candy bars) and five different kinds of milk. Prices range from $6 with up to two cereals and $7 with up to three plus more for the toppings ($.75 each). 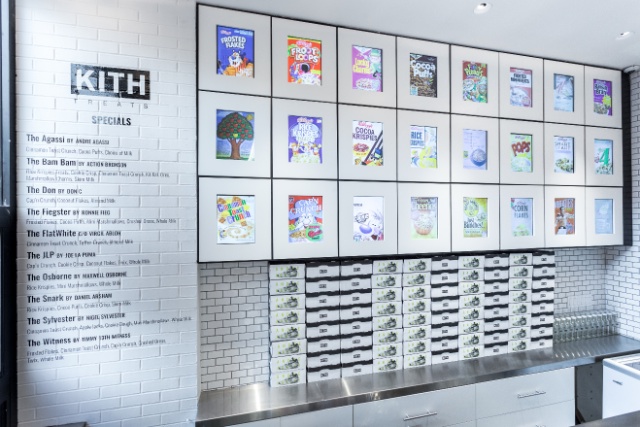 Salad Bar free-for-alls make some of us uncomfortable, so let someone like Andre Agassi (Cinnamon Toast Crunch, Cocoa Puffs) or Action Bronson (Rice Krispies Treats, Cookie Crisp, Cinnamon Toast Crunch, Kit Kat, Oreo, Marshmallow Charms and lol Skim Milk) do the choosing for you off the special menu. Since this is all just dessert masquerading as nutrition, there's also an option to swirl cereals and toppings together ($5.50), a version of which has been made in every stoned college student's dorm room at one point or another.