A Slice of Mexico in Chelsea 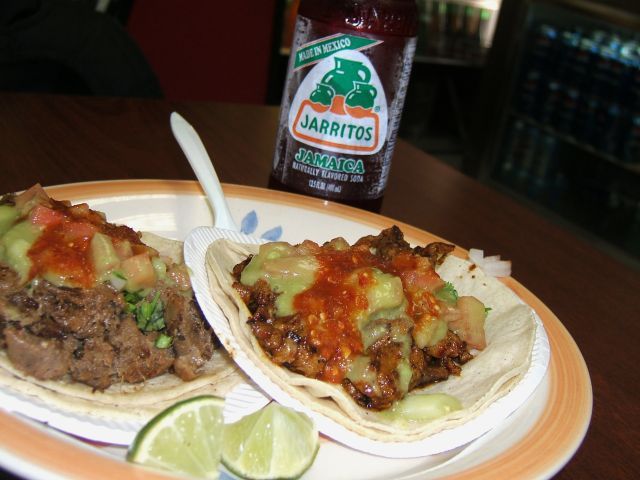 Lately we've had tacos on the brain, particularly those that involve organ meats and creepy crawlies some folks consider to be Fear Factor fare. Given our taste for the bizarre, it may be hard believe that there are times when we crave nothing more than a simple pork or beef tongue taco.

Last night at about 1:30 a.m., we found ourselves in such a mood. As luck would have it we also found ourselves on W. 23 St.standing in front of Great Burrito, a hole in the wall that proudly bills itself as a spot for Tex Mexican Food, which the sign indicates consists of "Italian Pizza" as well as "Tacos and Tortas." Sure, we'd downed quite a few brewskies, but we were'nt going blindly into this self-proclaimed Tex-Mex/slice emporium. It was recommended by friends who know their way around a tortilla.

The majority of the patrons last night had a serious jones for Hawaiian Pizza, which made us doubt the quality of Great Burrito's "Tex Mexican" fare. Our spirits were lifted when we saw the beverage case brimming with Jarritos Mexican sodas and we promptly ordered up one taco de lengua and one al pastor. It quickly became clear that Great Burrito has very little to do with "Italian Pizza" or "Tex Mexican" food. It's a slice and taco joint. We couldn't help but smile when our tortillas were placed in the pizza oven. Using tomato sauce as a stand-in for salsa was slightly less amusing. That gaffe aside, the creamy beef tongue was quite good. Sure the al pastor lacked the subtle, sweet spices one finds in the taquerias of Jackson Heights, but Great Burrito still serves up Chelsea's best bargain Mexican at $2.50 a taco. We'll leave it to more adventurous eaters to evaluate their Italian Pizza.

#As
#Chelsea
#Eat on the Cheap
#fare
#fear factor
#food
#friends
#heights
#italian
#jackson heights
#pizza
#restaurants
#tacos
Do you know the scoop? Comment below or Send us a Tip