A Secret Cocktail Club Is Launching In NYC Next Month

The allure of the "secret" endures as a coveted dining experience, from supper clubs to burger joints to cocktail bars. A new cocktail club launching in January combines New Yorkers' penchant for things that are exclusive with our desire to drink. A lot.

Wine & Whiskey, a members-only cocktail consortium, first launched as Liquor Lab in Chicago and has since expanded its operation to NYC. The premise is straightforward: a membership buys one the option to attend multiple ticketed events produced by the club throughout the year, all of which take on a unique concept in partnership with a local mixologist. 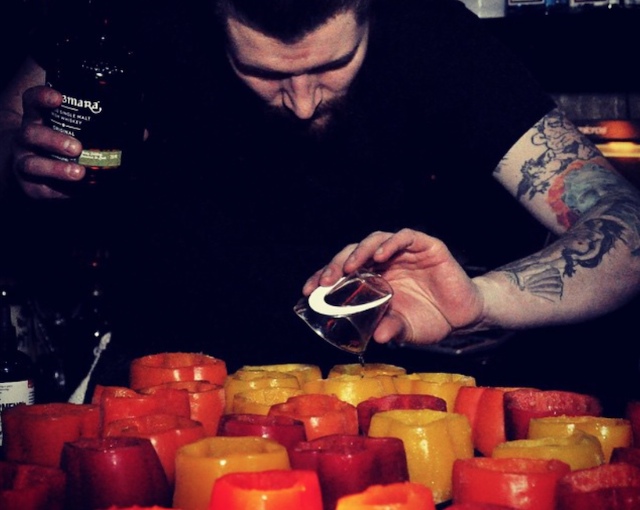 As for the secret element, guests won't know who, what, or where the event takes place until the week-of. In Chicago, venues ranged from private penthouses to cigar lounges and even a glass blowing studio. Meyer didn't want to spill the beans on too many specifics, but indicated most events would take place in Lower Manhattan and Brooklyn, in secret back rooms or taking over an entire bar.

But back to the all-important drinking. The local talent won't just be shaking up what they're doing at the regular jobs. At a previous event, bell peppers were flash frozen and used as rocks glasses. Drinks weren't even sippable in some cases, like a Hurricane made out of gelatin and formed into an upscale Jell-O shot. Attendees—which include the member and one guest, though sometimes additional spaces are available—typically get five cocktail "courses" throughout the event and there are often small bites to pair with the drinks.

Year-long memberships, which are on sale now for $175, include invitations to all the mixology-led events (individual ticket prices to events vary), in addition to other cocktail- and alcohol-centered happenings. Membership cards used to identify members also allow for free drinks at local watering holes, and members will also receive a year-end compendium cookbook with recipes from all the year's events.