As you'll know if you've read a single magazine or website this week, 30 Rock wrapped up its seven-season run last night. Because apparently every sitcom must promote a dessert food before joining the great syndicator in the sky, last night Ben and Jerry's unveiled its 30 Rock-inspired ice cream, Liz Lemon. 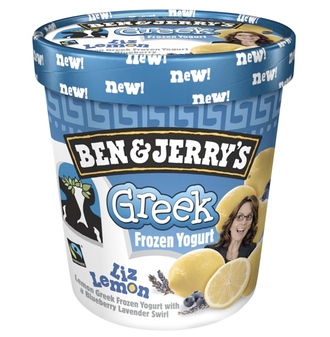 Liz Lemon is one of Ben and Jerry's Greek frozen yogurts, which they began selling last year. Simpler than the some of the company's more ambitious concoctions, the flavor combines a lemon base with a blueberry-lavender swirl. The Greek frozen yogurts are known for their tartness, but we found Liz Lemon to be smoother and creamier than the rest of the line—think more lemon gelato than lemon sorbet. The blueberry-lavender swirl is barely perceptible, but added a nice visual contrast to the otherwise plain-looking frozen yogurt.

Ben and Jerry's co-founder and occasional occupier Jerry Greenfield was on hand to launch the flavor, and told us that while 30 Rock has wrapped, Liz Lemon (the ice cream) will stay around "as long as it sells." We hope the dessert, launching in scoop shops this month and in pints soon after, sticks around at least through summer, as the fruity melange is far better suited for warmer weather than the arctic madness we've been having lately. Until then, we'll be curling up by the fire with an e-cig and a pint of Schweddy Balls. Yeah, we get freaky on Fridays.

#30 rock
#ben and jerry's
#Liz Lemon
#original
Do you know the scoop? Comment below or Send us a Tip