Every day's an excellent day for NYC pizza eaters, but this past Monday was just a bit more exceptional than most. That's because two pie-slinging icons opened up shop in the East Village area, bringing two very different (but equally appealing) styles to a neighborhood rife with pizza options. We've already feasted at both new spots, and you should too.

Una Pizza Napoletana
You know the backstory here, right? How Anthony Mangieri abruptly shuttered his original, adored Una Pizza Napoletana on East 11th Street some nine years ago (it's been Motorino ever since), and decamped to San Francisco? Well now Mangieri is back in the big town with Una Pizza 2.0, a hip, heavily-tiled space located near the north end of Orchard Street.

As at his original restaurant, Mangieri wood-fires Naples-style small pies—chewy and charred at the edge, soft in the middle, every bite insanely good—with only four simple varieties available each night. That is, except on Saturday, when Mangieri breaks out the big guns with his Apollonia pie, an incredibly rich and creamy concoction which adds egg, some sharp parmigiano, and the funk of salame to the mix. I was fortunate enough to stumble upon the "secret" opening last Saturday evening, and while all the pizza here is sublime, this is the pie I'll be back for again and again. Yes, even at $25 each. 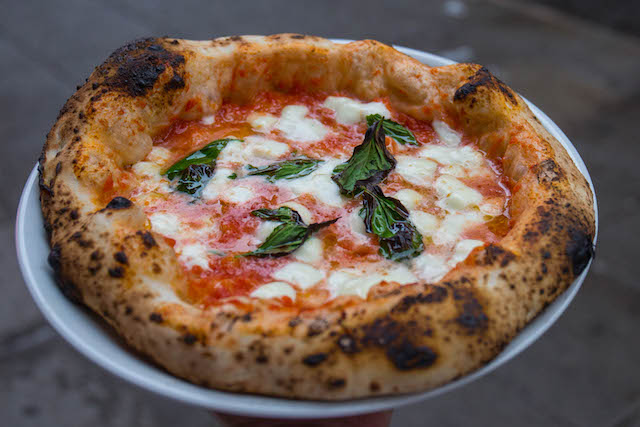 In addition to pizza, Mangieri's new partners from nearby Contra and Wildair, the talented chef-owners Jeremiah Stone and Fabian von Hauske Valtierra, are offering a short menu of small plates, including a beefy Carne Cruda with green olives and pistachios, Burrata with lobster oil, and a lively 'Nduja, or spreadable salami, layered with thin-sliced turnips. Beer and wine are coming soon, and there are two desserts available. A line formed outside the doors about 30 minutes before the 5:30 opening on Monday, but we were all seated immediately.

Una Pizza Napoletana is located at 175 Orchard Street between Houston and Stanton, and is open for dinner from 5:30 to 11:00 p.m., Monday through Saturday (unapizza.com)

Joe and Pat's
Also on Monday, famed Staten Island pizza institution Joe and Pat's opened its first Manhattan restaurant about a half mile up from Una Pizza on First Avenue. In case you've never hopped on the ferry to try these pies in their home borough, know that this family-run operation has been making people happy across the harbor since 1960, and that their signature pie is built upon a barely-there, cracker-crisp crust.

The new Joe and Pat's is located in the long-time Lanza's spot and, with the latter's exterior signage, giant oil paintings. and oval-windowed front door still in place (plus the vintage-looking family photos wallpapering the oven nook), it feels like it's comfortably been here for years. The menu plays it pretty safe, with a focus on classic toppings for the pies and your basic array of pastas, entrees like Chicken Parm, a few salads and paninis. Booze, wine, and beer are all available as well. 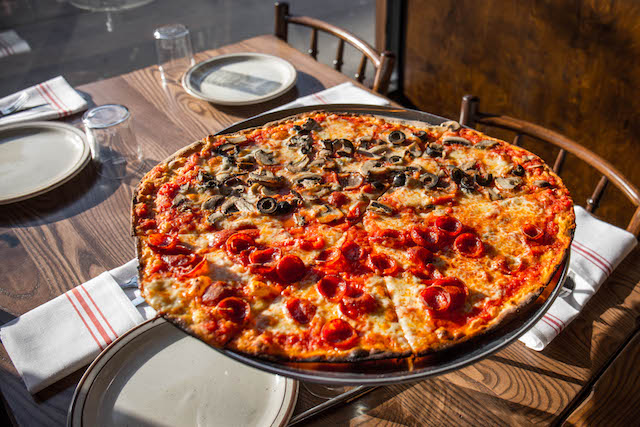 Joe and Pat's ultra-thin crust gets most of the attention—it's more crackery than Rubirosa, or even Marta, though the pie's center is soft enough so that the tip of your slice will droop—but your pizzaiolos are not afraid of piling on the mozzarella and extra toppings. The pepperoni half of the pizza we tried was a particularly solid addition to the neighborhood.

#joe and pat's
#pizza
#una pizza napoletana
#original
Do you know the scoop? Comment below or Send us a Tip