Original photo of Hooper's on Sesame Street by Jen Carlson/Gothamist

Jason Segel gave us a new Muppets movie, so the least we can do is point him in the right direction when it comes to finding his favorite sandwiches in NYC. Last night the actor Tweeted: "Now that Muppets is out I can say the things I've been wanting to. Top 5 sandwiches: BLT, grilled cheese, Reuben, tuna melt, PB&J." So, Jason Segel, the next time you come to New York to visit your Muppet friends, here's a little sandwich tour for you. Of course, people who aren't named Jason Segel are also welcome to indulge in these bread-based masterpieces.

BLT: If you want something slightly more fancy, 'Ino on Bedford Street in Manhattan has an interesting spin on the BLT, which includes pancetta, oven-roasted tomato, rucola and lemon mayo (for just $7). For a more straight-up, diner-styler triple decker, head to Hooper's on Sesame Street (just 4 bucks!).

GRILLED CHEESE:Queens Kickshaw in Astoria has so many grilled cheese sandwiches, which range from $5 to $11, and our own Jamie Feldmar assures us this is the "hot new grilled cheese place these days," noting they also have a lot of cider. While cider and cheese is a great combo, if you're turned off by the idea of pickled golden raisins being anywhere near these things (and who wouldn't be?), then we suggest a nice old fashioned bread, butter and american cheese grilled sandwich at Bouchon Bakery, which serves up slightly less adult version of the classic. 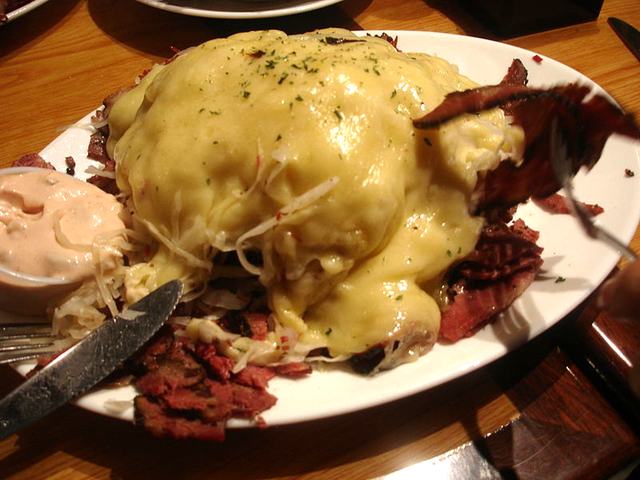 This Carnegie Deli reuben sandwich ate all of your other sandwiches.

REUBEN: For a good one, you're going to have to loosen the pursestrings and get in line—head to either Carnegie Deli or Katz's. At the former, the sandwich will cost you about $23, but you'll have plenty of leftovers. One patron described it as a meat salad—just look at that thing! At the latter, their combo of corned beef, swiss cheese, Russian and sauerkraut comes with a slightly lower pricetag of $16.55... plus you can get a side of whatever Meg Ryan got and spoof the orgasm scene because that never gets old.

TUNA MELT: Sadly, the 2nd Avenue Deli won't melt cheese on top of your tuna sandwich, but since they do have the best tuna sandwiches in all the land, then we suggest going a little DIY with this one. Head over there and order a tuna salad sandwich ($12.95, but worth it), and then find a piece of cheese and a toaster to introduce it to.

PB&J: If you don't want to go to the Peanut Butter & Co.'s sandwich shop, then 'wichcraft offers up a chunky PB&J with Greenmarket preserves for just $4.95, served up triple-decker style on pullman white bread.