A Night of Food and Feting: The 2008 James Beard Awards 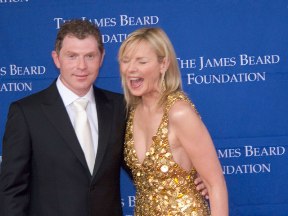 It was a big night for New York at last night’s James Beard Awards. The "Oscars of food" took place at Avery Fisher Hall complete with red carpet and celebrity hosts--Sex and the City's Kim Cattrall joined Iron Chef Bobby Flay at the podium, and much like the Oscars, engaged in some rather awkward “witty” banter:
Kim: I’d like to have a throwdown with you, Bobby.
Bobby: Sure, I’d challenge you in the kitchen anytime. I’ll be gentle.

New York started out strong, with Gavin Kaysen of Café Boulud given the honor of Rising Star Chef. He said that it felt like a wild ride and that it was hard to believe something like this happening in his first year in New York. He mentioned that Daniel Boulud was calling him during the post-award photo shoot to ask if he had won, and showed us the text message he sent along that said “Congratulations and don’t forget to thank your wife!” He didn’t forget.

David Chang won Best New York Chef, much to his own disbelief, beating out some pretty heavy hitters: Michael Anthony, Gramercy Tavern; Terrance Brennan of Picholine; Wylie Dufresne, WD-50, and Gabriel Kreuther, The Modern. Chang said that he was “dumbstruck and awestruck,” and gave his “hats off to everyone cooking in NYC,” particularly his heroes and the gang cooking at Momofuku. [More after the gallery and the jump!]

Joe Bastianich and Mario Batali prevailed in the Best Restaurateur category, which was extremely fitting as they had celebrated Babbo's 10th anniversary at a party earlier that day. Joe particularly thanked him mom, Lidia, for teaching him to be a restaurateur, and his wife, for letting him be one. Danny Meyer’s Gramercy Tavern took a big win for Outstanding Restaurant, and also got a nod for top wine service at Eleven Madison Park as Wine Director, John Ragan earned that honor.

Other top awards went to Central Michel Richard in DC for best new restaurant and to Grant Achatz for Best Chef. In his speech, Achatz thanked the community for the amazing level of support they put forth during his battle with tongue cancer (read more about this in the New Yorker), and although he was touched with offers from chefs across the world who offered their help, he didn’t take anyone up on their offers to come into his kitchen and help cook. “I couldn’t do that to my cooks.”

After the awards it was on to the food. The theme of the evening was “Artisanal America: The Craft of Cuisine,” and each award-winning chef selected a dish that showcased the goods of an artisanal producer. A greenmarket favorite, Flying Pigs Farm was featured in a few dishes; owner Jen Small noted that their pork was in Bill Telepan’s scrapple and their lard was in Scott Peacock’s flaky biscuits. Peter Hoffman from Savoy selected his dish, as usual, by assessing what was in season. He knew he wanted to do a rabbit dish, then went for the fava bean puree for a seasonal flair.

Highlights included the exquisitely intense mixed berry sherbet with candied mint and rose petals from Chez Panisse (the berry mixture was shipped from Berkeley and the folks at Il Laboratorio del Gelato were kind enough to lend their equipment for the final freeze), the perfect meatloaf from The Dressing Room in Connecticut and the foie gras with strawberries and arugula from Butter that literally melted in your mouth.

The festivities continued into the wee hours with after parties around the city. After an early start fueled by champagne and charcuterie at Bar Boulud and oysters (and more champagne) at P.J. Clarke’s many headed downtown to Eleven Madison Park. The Chang party bus was in attendance, as were chefs Cesare Casella, Johnny Iuzzini, Alexandra Guarnaschelli, and plenty of other chefs, press, PR folks and others, enjoying the fun despite the long wait at the bar. Apparently the party continued at Gramercy Tavern sometime after 2 a.m., so you might want to save your restaurant reservations for tomorrow night.