Our latest installment of Quick Bites brings us to Little Italy for pizza frittas and a side of tomato sauce on our shirt.

THE VIBE
At first glance, Zia Esterina looks like the most average sort of NYC slice joint, with a generic design scheme, slapdash seating (and no counter space for standing), and industrial-size cans of tomato sauce stacked wherever. Even less alluring, it's located on a tourist-clogged block in Little Italy, where you would normally never, ever consider eating pizza.

Yet the opening of this spot last week caused a bit of buzz in certain pizza-mad circles, as it marks the first ever U.S. outpost for rockstar Naples pizzaiolo, Gino Sorbillo. The Italian Zia Esterinas (there's one in Milan, too), are apparently routinely mobbed, and the crowds are attracted as much to Sorbillo's celebrity—enhanced by a well-publicized battle with the mafia a few years ago—as they are to his acclaimed street snack, the stuffed "pizza fritta," or what we would call a calzone. 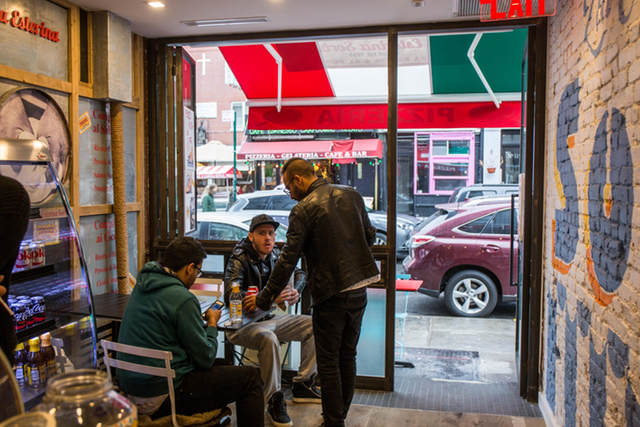 Sorbillo's Mulberry Street restaurant has yet to become a line-out-the-door type of situation (in fact, during one recent visit we were the only ones there), perhaps because everyone's waiting for his full-service restaurant to open on the Bowery, which will start slinging pies as soon as the beer and wine license comes through.

But if you do venture into Little Italy, be prepared: your "to-stay" options are limited and uncomfortable, there are no plates available should you want to share a pizza with your friends, nor any forks should you desire to scoop up fallen gobs of ricotta cheese with something other your fingers. And there aren't any cups should you want some water.

THE BITES
Zia Esterina sells two types of pizza, but the one you should dive into first is deep-fried and stuffed with several sorts of meats and cheeses. The best one of these pizza frittas is the ciccioli, which is a kind of pressed pork belly—so it's chewy, slightly sweet, and a nice amount of gamey—mixed with ample amounts of creamy ricotta and gooey smoked mozzarella, a bit of tomato sauce, and enough black pepper to justify the seasoning's inclusion on the menu.

All of the ingredients are wrapped in a thin layer of dough and plunged into oil until the whole thing puffs up and turns golden brown. It tastes great, with deeply satisfying explosions of goopy, salty goodness going off in your mouth, but it's remarkably difficult to eat the Sorbillo pizza fritta without the whole thing flopping onto your shirt or the sidewalk. There's no structure here, and when you try folding it to add some heft, cheese squirts out everywhere. The Prosciutto Cotto calzone was virtually identical to the ciccioli by the way, just filled with more familiar, less intensely-flavored pieces of pig. 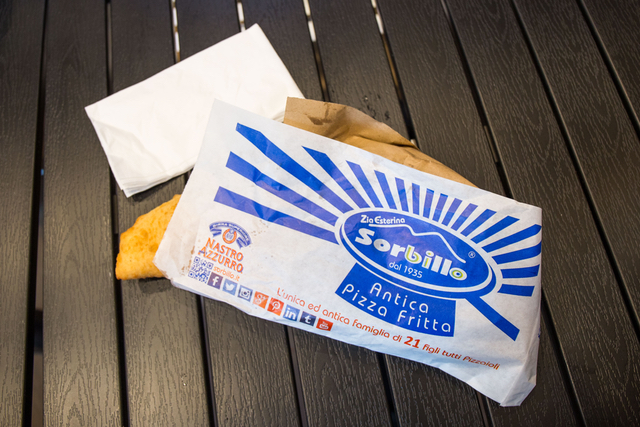 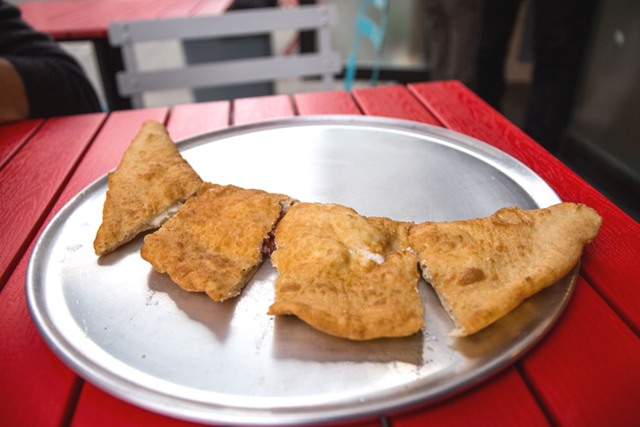 You can also get what Sorbillo calls "Regular Pizza," which are individual-sized pies made with the same ridiculously limp dough. Again, these are good tasting things to eat when they first hit your table—a buddy and I split a basic Margherita and a sauce-less but meaty Little Italy, which came topped with both ciccioli and salami—but the mechanics are pretty much a disaster. You know how Neapolitan pies are "wet" in the middle? These are wet the whole way round. Plus the spongy super-thin "crust" retains no heat, so the whole pie is cold before you get through your first slice.

THE VERDICT
Pizza completists should definitely brave lower Mulberry to sample Sorbillo's strangely unstructured but borderline delicious pizza frittas. Just don't expect to get good Instagrams out of the journey.

Zia Esterina is located at 112 Mulberry Street, just north of Canal. No phone, website, or hours listed anywhere that I can find, but they were open at 3:00 in the afternoon on one day, and 6:00 in the evening on another.

#gino sorbillo
#little italy
#quick bites
#zia esterina
#original
Do you know the scoop? Comment below or Send us a Tip