A Mellow Review Of By Chloe's New CBD-Infused Product Line Two major events in the world of cannabidiol are happening today that may forever alter how we think about and use CBD: the DEA has officially placed CBD medication Epidiolex in Schedule V of the Controlled Substances Act, making it the first cannabis-derived medication to achieve FDA approval. And by Chloe, the chic vegan restaurant and sweets purveyor, is launching their own CBD-infused product line of sugary confections. While the former may open the door to more research and scientific legitimization of marijuana-based medicine, the latter is the only one offering you the opportunity to purchase something called a "RAINBOWEY OOEY GOOEY CINNAMONEY ROLL."

FEELZ by Chloe (which was known as Munchies by Chloe up until recently) is the largest line of CBD-infused food items to hit NYC since it exploded in popularity this year, featuring 22 different products including cakes, cupcakes, cookies, rice krispie treats, mini pies, popcorn, bubble tea, dog treats, and more. All these products—which have names like CHOCOLATEY LEAFY BROWNEY, A-TO-CBDEY COOKEY and SUGA CINNAMONEY ESPRESSOEY COOKEY (you may be starting to notice a pattern)—will be available to purchase exclusively at two by Chloe locations (185 Bleecker Street in Greenwich Village and 181 Front Street in the South Street Seaport) for the next two weeks. After those two weeks, they hope to continue selling the most popular products on Friday-Saturday-Sundays. 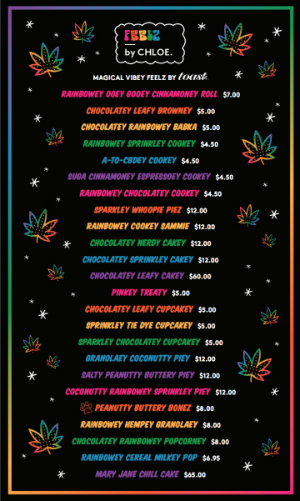 The catalyst for the project came last spring, when by Chloe first released a "420 brownie" on 4/20. Although a decent-sized batch was made that was supposed to last the whole weekend, it sold out in 30 minutes. As one by Chloe employee put it, "once we saw that response, clearly we were going to keep going." That fateful brownie is now known as the CHOCOLATEY LEAFY BROWNEY, as one might expect.

"I worked with our R+D team to create a psychedelic rainbow menu of delicious sweets, treats and snacks," Wasser said. "Many of the items we created are fun twists on our best-selling items—some of these colorful twists include our Cinnamon Espresso Cookie, Cinnamon Roll and Chocolate Babka."

Working in partnership with marijuana lifestyle company/newsletter Nice Paper and CBD/medical marijuana company Toast, by Chloe used Toast CBD oil to infuse the treats. As dosage has become one of the stickiest issues around CBD for prospective users, all of the items were designed to have approximately 2.5 mg per serving (ie, one brownie or one rice krispie), which is a relatively small amount—meaning, you definitely aren't going to taste anything different about the treats, and you may only feel a mild calming effect, unless you eat a few items. (The bubble tea has the option of adding up to 5 mg, and the MARY JANE CHILL CAKE and CHOCOLATEY LEAFY CAKEY, which you have to order in advance, also contain a larger amount of CBD in them.)

"There's a goldilocks zone for everybody," explained Charlotte Palermino, co-founder of Nice Paper. "If you're doing epilepsy treatments, you need in the hundreds of milligrams. For anxiety, it's anywhere between 10 and 100 mg, it's a pretty big window. We didn't want to give too much CBD to anybody, so this is just a taste."

As for what people should expect, she said that if you're eating a couple treats, "you know flight or fight, when you're feeling really anxious? You're gonna feel a little less of those firing receptors. It activates your serotonin receptors after a certain level, so you should be feeling anti-anxiety benefits."

Gothamist sampled some of the treats in our office. I was impressed that the PINKY TREATS tasted like a brick consisting solely of the marshmallows from Lucky Charms. While there was no way to tell the difference between the normal Cinnamon Espresso Chocolate Chip Cookie and the updated SUGA CINNEMONEY ESPRESSOEY COOKEY, and the CHOCOLATEY cupcakes tasted like any other lowercase chocolate cupcakes, something like the CHOCOLATEY NERDY CAKEY was...a bit confusing.

"I am not sure what kind of monster puts NERDS on a BROWNIE," noted reporter Claire Lampen. "I also feel like I have glitter in my teeth. That said, I will eat these treats in the hopes of attaining some calm before the subway, and I will ignore the fact that so much sugar probably cancels out whatever chill these trace amounts of CBD might have imparted."

Initially, I was skeptical, especially knowing the low dosage of CBD in each treat and the wide mix of reactions people tend to have to it. I felt an initial sugar high kick in that had me pacing around my desk slightly more than usual. But as I chipped away at more of the treats, and sipped at the bubble tea for around half an hour, I started to feel something that was certainly different from my usual afternoon comedown. It was a very low-level calming effect, like having a little magnet in your belly compelling you to sit. I was still able to finish my last story of the day, but I had the equal desire to take a long nap.

I'll give the last word to reporter Jake Offenhartz, who I found in a similar daze as me: "I'm told that CBD-laced gourmet treats are not supposed to get you high, but I definitely felt a bit kooky for a few minutes afterwards. I guess I'd describe it as a 'chill' 'body high' that would've been nice for both a hike through nature or an extended sit on a couch. Unfortunately, I am at work, with no choice but to listen to the president sundowning on live TV. No fancy snack can prepare you for that."

#brownies
#by chloe
#candy
#cbd
#feelz
#original
Do you know the scoop? Comment below or Send us a Tip