Chef King Phojanakong looked surprised at the large frozen chunk of blood sitting in the plastic food container. The blood hadn’t completely thawed, despite the amount of time he left it in the fridge to defrost. I didn’t know that fresh blood is only sold frozen—I naively imagined it sloshing in buckets at the back of the butcher. Still, there was enough for dinuguan, a Filipino pork blood stew, Phojanakong announced. He started sautéing onions, garlic and ginger, and browning the pork belly. His mother used to call it chocolate meat, to trick him into eating it as a child. “But it doesn’t taste like chocolate,” he said with a laugh.

We met at his restaurant Kuma Inn in the Lower East Side, on a Thursday in early April. Phojanakong opened Kuma Inn back in 2003. At that time, he said, there was only one other sit down restaurant in Manhattan selling Filipino food. But in the last few years, the cuisine has gained high-profile attention. In 2016, Bon Appétit named Washington DC Filipino restaurant Bad Saint the #2 restaurant in the country. Last May Los Angeles Times food critic Jonathan Gold declared LA the new hotspot for Filipino food.

Here in New York, Filipino restaurants are earning high praise, and a front page story in the New York Times food section back in March introduced readers to a sour, fermented, vinegary cuisine that goes far beyond adobo, the familiar braised chicken dish commonly made with soy-sauce and garlic. 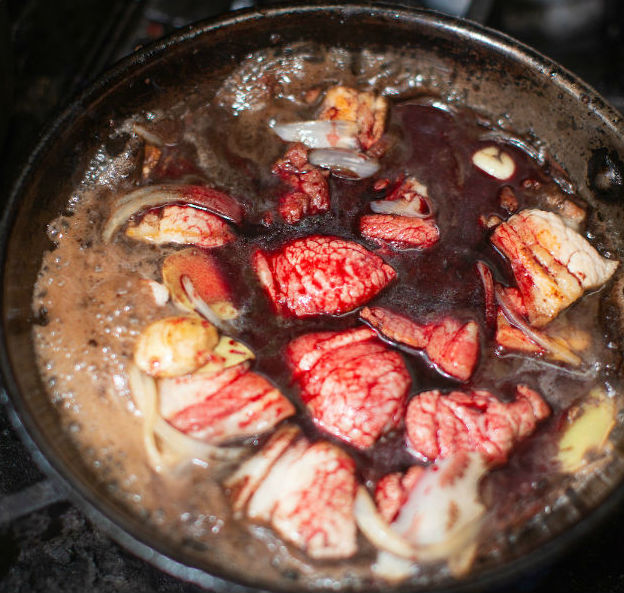 For an first time customer, Filipino food can seem like a mix of familiar and intimidating. When I met Phojanakong, he cooked two dishes that marked that distinction. For the dinuguan, he added equal parts apple cider vinegar, water, and pig’s blood. It bubbled and turned brown as soon it hit the pan, and he had to quickly stir it to keep it from congealing. After a few minutes, he set it aside to simmer and started on Pancit Canton, a Cantonese style noodle stir fry, with carrots, onion, garlic, a Chinese pork sausage, and Bok choy. He added the egg noodles, and then fish sauce, oyster sauce, soy sauce, and calamansi juice.

Calamansi is a common citrus fruit in the Philippines, the size of a kumquat. Phojanakong describes the taste as a mix between a lime and a tangerine. “Typically, in the Philippines, the calamansi would be on the side of your dish,” like a wedge of lemon, he said. Here, the fruit is very hard to get imported, so he uses the juice.

Trinidad said it’s an easy dish to make at home, but if you want your beef broth to come out like the one at Jeepney, you will need to pick up some neck bones and beef knuckles from your butcher.

For hard-to-find Filipino ingredients, both Phojanakong and Trinidad head to Johnny Air, a market inside of a Filipino shipping company on Avenue A. Chinatown is also another important source of ingredients. Phojanakong gets the blood for his dinuguan in Chinatown, and you should too if you want to make the dish. Calls to several high end butchers in Brooklyn revealed that they only sell it by the gallon, and ranging in price from $10-$60, depending on where you go.

When Phojanakong finished and plated the blood stew, the color and texture reminded me of a Mexican Mole sauce. I was surprised by the brightness of the dish, which came from the vinegar. Phojanakong doesn’t actually have the dish on the menu at Kuma Inn, he's not sure how he would sell it to customers. But it is on the menu at Jeepney. The dividing line of this dish reveals the different ways that these chefs approach serving Filipino food in New York.

Phojanakong embraces adaptation and substitutions. He used apple cider vinegar for the dinuguan, instead of the customary coconut or sugarcane vinegar. A dish of summer rolls calls for heart of palm, but instead he substitutes bamboo shoots or seasonal vegetables. He shrugs his shoulders at the idea of authenticity. “We have no palm trees in New York City...We’re not in the Philippines,” he said. “If you grew up eating McDonalds, that’s your authentic hamburger.” 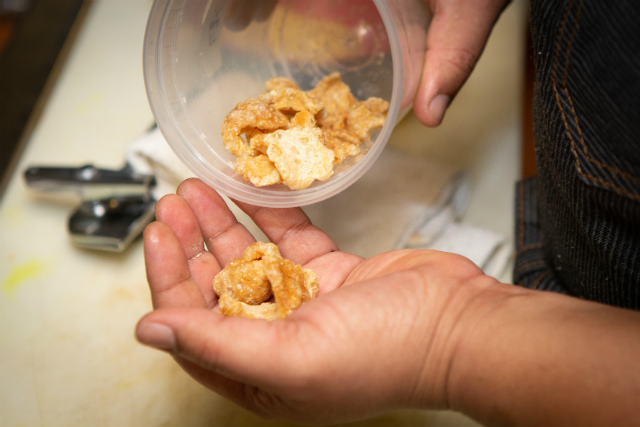 Phojanakong was born in New York, to a Filipino mother and a Thai father, and he spent summers as a kid in the Philippines. Yet when he opened Kuma Inn, some Filipino customers were skeptical that his food was authentic. Trinidad, who was also born in New York, faced questions of authenticity from some Filipino customers, he said, for his Dominican heritage. He spent months living in the Philippines to learn about its food, and reportedly spent years mastering the cuisine. He recently came back from a trip to the Philippines with Nicole Ponseca, the restaurant’s owner, for research on their upcoming cookbook, “I Am A Filipino.”

“We want to cook the whole island,” he said. “We’re going to cook it exactly the way it's been cooked in the Philippines….and it's OK if you don’t like it, but we’re not going to dumb it down for the American palate. We want to keep it authentic.”

One authentic dish that Jeepney serves, that other Filipino restaurants in Manhattan avoid, is Balut, a fertilized duck egg. It’s a dish that has inspired stories and videos of reaction shots, and it was even featured on Fear Factor. But Jeepney takes pride in the dish. It’s the only picture featured on the Dinner page of their website. They get their duck eggs from Long Island, 11 to 14 days from hatching, Trinidad said, and then he shot me a look. “Want one?” Perhaps a little too quickly, I said yes.

He began boiling the egg, and then cut a strip of banana leaf and passed it across the flame on the gas stove. On the plate went the banana leaf, a mound of salt, and then the Balut balanced upright. He shone his cellphone flashlight on the egg, and found a hollow spot at the top. He told me to crack it with the back of the spoon. Opening the tip, I found a webby membrane. I scratched it off with my finger, and saw a brown liquid pooling underneath. “Now, you want to drink that soup,” he said, and I did. 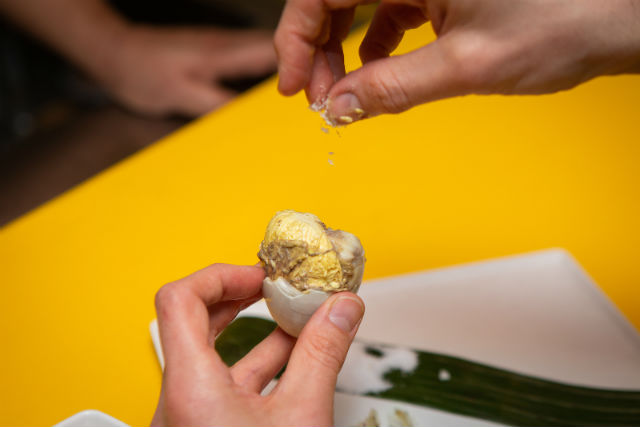 I continued peeling the eggs shell, unspooling the Balut, and found the tiny duckling wrapped around a hard boiled yolk. The meat was soft and tender, and surprisingly mild. It did taste, as Trinidad described, like a very rich hard boiled egg.

For all the ceremony around this dish, it’s a casual food, says Trinidad. In the Philippines, friends get together for a bucket of balut and beers. And while Balut may be authentically Filipino, Trinidad and Ponseca have been pairing it with an authentic American spectacle, an eating competition. They are bringing back their annual Balut eating contest this year.

If you are looking to try a variety of Filipino Food, there’s no better time than next week during Filipino Restaurant Week, May 14-26.

#cooking
#filipino food
#food
#nyc
#original
Do you know the scoop? Comment below or Send us a Tip