"Meaningless to millennials" — The Salt Lake Tribute said of Howard Johnson's in an April 2015 article.

The iconic, or at least nostalgic, Howard Johnson's in Lake George has reopened, and proprietor John LaRock told the SLT: "We have one of the last orange roofs left," adding that many customers love the old school selections—"We have a lot of people ask for the root beer floats. People love the fried haddock and clams, like it used to be." And of course, that orange sherbet that Don Draper forced upon Megan in Mad Men. 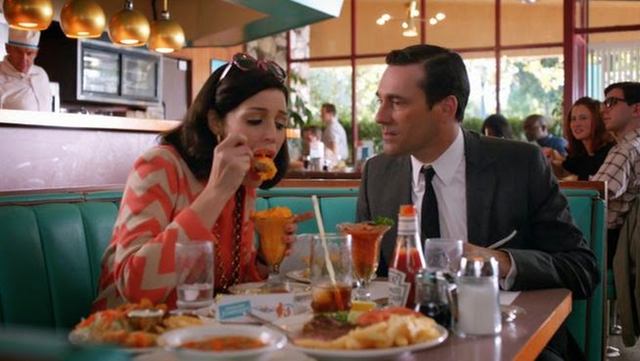 LaRock is able to run the place under its real name because the Wyndham Hotel Group (which has the rights) "allows remaining restaurants to use the brand name based on grandfathered contracts."

The NY Times reported on the grand reopening of this "symbol of roadside Americana" on Friday, and LaRock told them, "We’ve had people from Connecticut, Maine and New Jersey drive all the way here just to sit in a HoJo’s, because they had three things — a breakfast counter, ice cream shop and restaurant—all under one roof. I think that’s why HoJo’s through the years did so well. That’s what I’m hoping to do again."

The restaurant first opened in Lake George in 1956, about ten years before Don and Megan would have come through, and only closed in 2012 (at which time it was reported that Rachel Ray got her start there!). LaRock just recently reopened this past January, and is counting on summer business to keep afloat.

Be sure to check out the Tiki Resort when you go...