A Guy Fieri Bar Crawl Is Happening In Midtown On Saturday

These past few months (years) have been so focused on America's Cheetos-haired President-elect that we'd almost forgotten about our other anti-hairstyle icon: Guy Fieri. But Dave Gold hasn't forgotten and this weekend the Fieri superfan's organizing a bar crawl in celebration of the Food Network personality and "restaurant" owner. On Saturday, FieriCon's blowing through Midtown so fellow fans can get Donkey Sauced (I'm so, so sorry).

"It was just me and my friend hanging out one Sunday watching Food Network, eating Chinese food as we normally do, and we were like, 'Wow, how fun would it be to dress up like Guy Fieri for one day? Walk around, talk like him, act like him?'" Gold recalls. "And it turned into this idea of having a Guy Fieri bar crawl, where we start at a bar we go to, and end at Guy's American Kitchen & Bar. We're in Times Square with all these tourists seeing five or 10 of me and my best friends dressed up like Guy Fieri."

At noon, the crawl begins at The Hog Pit, a spot Gold and friends have frequented in the past. After an hour, they'll move on to the next stops, spending about another hour at each before the fifth and final stop of the night at Fieri's eponymous "restaurant?" on West 44th Street. 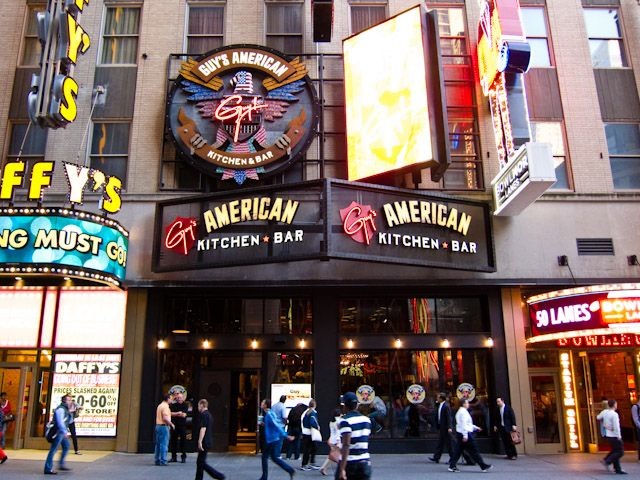 Gold says he's gotten thousands of pageviews since launching the website on Tuesday. "It's crazy," he says. "It's somewhat overwhelming, it was supposed to kind of an inside joke. A part of me thinks that only 15 are actually going to show up. Or it's going to be 75 people. I really don't know."

As a true admirer—and Gold's sincerity is obvious—he must have a favorite of Fieri's television oeuvre. "I gotta go with Triple D [Diners, Drive-Ins and Dives], that's it for me. Don't get me wrong, I love Triple G [Guy's Grocery Games]...but you get to hear the stories on Triple D and see their signature dishes. That's when Guy gets to make the best jokes and all of his sayings. So definitely Triple D for me."

And for the record, Gold is Bob's Clams, "through and through." Sorry Lillian.